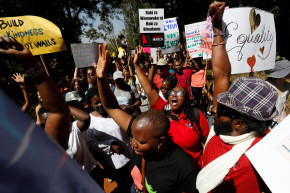 Donald Trump reinstated the so-called 'gag rule' on Monday morning, just a day after the anniversary of Roe vs. Wade

In one of his first acts as president of the United States, Donald Trump has reinstated the so-called Mexico City rule that blocks U.S. funding to international organizations that provide health and family planning services that include abortion.

Known also as the “global gag rule,” the policy was first enacted by Republican President Ronald Reagan in 1984, though it was intermittently cancelled and revived throughout the coming years. It was last revoked by President Barack Obama in 2009.

Trump signed the executive order on Monday, just a day after the 44th anniversary of Roe v. Wade, the 1973 landmark U.S. Supreme Court ruling that upheld a woman’s right to abortion.

“With the new Trump Administration, the US is now positioned to join a growing bloc of countries that seeks to reverse the international consensus on sexual and reproductive health and reproductive rights,” Françoise Girard, President of International Women’s Health Coalition, a New York-based NGO that promotes women’s human rights, health, and equality said over the weekend, before the order was signed.

“We stand ready to defend the global gains made on behalf of women and girls over many years of struggle,” she said, adding that a US retreat from involvement in international women’s issues would contribute to an increase in early marriage, unintended pregnancies, unsafe abortions, and sexually transmitted infections.

The Women's March on London

The Guttmacher Institute, an organization that seeks to promote women’s reproductive rights in the US and abroad, estimates that more than $600 million in US funding for family planning reached 27 million women worldwide in 2016. The United Nations refugee protection agency UNHCR, which receives more than half of its funding from the US, could also be put on the chopping block. In a recent tweet, Trump denigrated the international body as “just a club for people to get together, talk and have a good time.”

Advocates worry that a Trump foreign policy focusing on fighting “radical Islamic terrorism,” combined with an apparent disregard for American and international human rights organizations, could translate into the gutting of State Department and USAID programs that operate in more than 80 countries to promote gender equality and prevent sexual violence against women and girls. Last month, the Trump transition team reportedly requested the State Department and USAID detail the positions and costs for programs related to that cause, an ominous move considering the team’s similar request of the Energy Department surrounding climate change officials.

While Donald Trump has asserted on the campaign trail that “nobody has more respect for women than I do,” he has also asserted that women should face legal punishment for undergoing terminations, and wrongly denounced late-term abortions for enabling doctors to “rip the baby out of the womb of the mother just prior to the birth of the baby” — a startling and medically inaccurate description of the procedure.

Activists worry that Trump’s ignorance of female health issues combined with an apparent disdain for women in general — evidenced by his body shaming tweets and blatant sexual objectification of women, including his own daughter — could create a perfect storm involving unpredictably disastrous ramifications for the realm of international women’s health.

Budget cuts would severely impact already underfunded organizations such as the United Nations Population Fund, the agency responsible for ending deaths in childbirth. Since 1990, the organization reported that preventable maternal deaths as a result of childbirth complications, almost in the world’s poorest countries, have dropped from 532,000 to 303,000 women, but as multi-billion dollar shortfalls continue, that progress is beginning to plateau.

Trump has also worried advocates with his cabinet picks, including Health and Human Services Secretary Tom Price, a staunch Obamacare critic who holds anti-science and anti-reproductive views, and is also set to assume a leading role at the World Health Assembly, the governing body of the World Health Organization (WHO), an organization that sets global standards for sexual and reproductive health care.

“It would be devastating if the US joined the group of countries proactively working to undermine women’s reproductive rights in the name of ‘traditional and family values’,” said Amnesty International in a press release Saturday. “A rollback of rights in the US could even embolden the anti-abortion stance in countries like Poland and Northern Ireland, ‘legitimizing’ anti-choice attitudes and making the global environment even more hostile for women.”