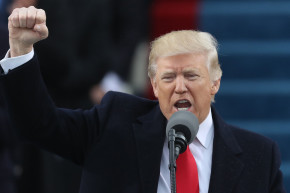 President Donald Trump at the inaugural address — REUTERS
By Gilad Shiloach
Jan 22, 2017 at 5:44 AM ET

Social media in the Middle East has been blowing up since President Donald Trump vowed in his Friday inaugural speech to “unite the civilized world against radical Islamic terrorism” and eradicate the phenomenon “completely from the face of the earth” — a statement seen by tens of thousands as a clear declaration of war against all of Islam.

Among the more than 95,000 Twitter users posting under the Arabic hashtag #TrumpInauguration (#تنصيب_ترامب) were Trump critics from Jordan to Egypt to Saudi Arabia outraged by the president’s inflammatory conflation of Islam with violent extremism. Many accused the 45th president of singling out Islamic terrorism while refusing to address radicalism in other forms, including within his own constituency.

“In portraying Islam as terrorism without acknowledging that terrorists were created by American policy, Trump is shameless and racist, like his predecessors,” wrote one user in Saudi Arabia.

Some claimed that Trump’s statement was “humiliating for all Muslims around the world”, and that “Trump is launching a new Crusader war against Islam and Muslims.”

Since his campaign, Trump has inspired anxiety and anger among the American and international Muslim community. In 2015, he called for a ban on all Muslims seeking entry to the United States, and continued this past summer to promote the idea of creating a database to track Muslim Americans, to the outrage of Silicon Valley tech companies and public figures who pledged to prevent such a plan from becoming reality.

On Twitter this weekend, people across the world urged  fellow Muslims to “prepare for the worse, unite and trust Allah.”

But others also found opportunity in Trump’s blatant racism, calling him “an American phenomenon, better than hypocrites like Obama,” and credited him with “best representing America and exposing its truth.”

“Obama killed thousand of Muslims, displaced many and destroyed whole countries. So why people are angry that he’s leaving and think that Trump will destroy the world?” questioned another.