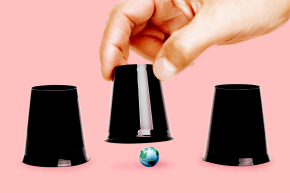 Psychological ‘Vaccine’ Could Make Us Less Open To Misinformation

Looking back on how he handled his wartime conversations with uneasy ally Joseph Stalin, Winston Churchill observed that “truth is so precious she should always be attended by a bodyguard of lies.” And that might be true even when not dealing with Soviet dictators: A new study finds an effective way to get both Democrats and Republicans to accept the scientific consensus on global warming is to first show them how climate deniers distort the truth.

Like a medical vaccine, it might be possible to inoculate people against a harmful, untrue ideas. Vaccines expose people to a much milder version of a dangerous virus in order to build up their tolerance. In the same way, sharing a much weaker version of a falsehood and then immediately debunking it could help prevent the spread of real misinformation about climate change.

In their experiment, an international team of researchers used the Oregon Global Warming Petition Project, a dubious list that claims to have the signatures of 31,000 American scientists who reject the consensus on climate change. (Charles Darwin and former Spice Girl Geri Haliwell have “signed” the list.) In an online survey of more than 2,000 people using Amazon’s Mechanical Turk crowdsourcing platform, participants’ belief in the scientific consensus on global warming increased 20 percent when the level of agreement was presented accurately, but it dropped nine percent when the Oregon petition was presented. When both were shown, they effectively canceled each other out, with a barely significant increase of half a percent.

The key difference came when the researchers first gave participants either a general message about how political groups distort the level of agreement on climate change or a specific warning about the myriad issues with the Oregon petition. These information “vaccines” largely protected people’s belief in the truth, even when they were later shown the misinformation.

Most encouragingly, the technique worked just as effectively on Republicans as it did on Democrats and independents. While conservative participants had been less likely than their peers to accept truthful information over falsehoods with no prior warning, the “vaccines” seemed able to break through those partisan barriers and make them as open to the truth as anyone else. This may not be a panacea against the epidemic of so-called “fake news” — or, to use the latest euphemism for lies, “alternative facts” — but if widespread lies really are like a disease, perhaps these psychological vaccines could prove part of the cure.