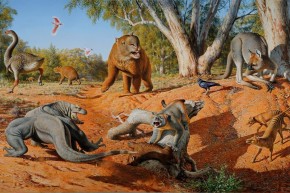 Australia’s many marsupials are already some of the most distinctive wildlife in the world, but they were even more remarkable 50,000 years ago. There were wombats the size of a rhinoceros, echidnas as big as a sheep, lion-like marsupials that were some of Australia’s biggest predators, reptiles up to 25 feet long, and flightless birds over 10 feet tall. So what happened to these mighty megafauna?

According to a new analysis of ancient poop, humans are what happened.

Not all the world’s large animals are gone. In fact, by one biological standard, any human above 90 pounds counts as so-called megafauna. But there are relatively few truly giant animals left compared to the past, and those that do remain — like elephants, gorillas, and tigers — are often among the most endangered animals in the world. As such, it’s useful to understand just why all those ancient titans went extinct. The debate has centered around whether the killer was climate change or human intervention, or both.

At least in the case of Australia, the record now appears clear: Megafauna were doing just fine until about 45,000 years ago, but were all extinct by about 40,000 years ago. The climate didn’t change much at all during that period, but that’s precisely when the first humans reached the continent.

Time periods that far back lie beyond the reach of typical carbon-14 dating methods, so to figure this out an international researchers had to try something else. That something was giant animal poop. The researchers collected sediment samples from the Indian Ocean, just off the coast of southwestern Australia, and tested for the presence of a particular spore commonly found in the poop of plant-eaters.

For more than 100,000 years, the amount of this spore the washed into the ocean was pretty much constant. That suggests Australia’s animal population was also stable, even as the climate changed. But as soon as humans are thought to have shown up, the picture changed, with the spores crashing almost entirely out of the sediment record.

The researchers point out that Australia’s first humans likely didn’t hunt as aggressively as other populations, in the same way that the Maori of neighboring New Zealand would later do with those islands’ giant bird population or, later, when white settlers nearly wiped out the American bison. And there’s no evidence that ancient Australians shared the aggressive hunting tactics of Eurasians, who would repeatedly trap prey in designated kill sites. It’s just that megafauna have such small populations and reproduce so slowly that they couldn’t cope with even a little bit of human hunting: Researchers have previously estimated that killing just one young animal per person every 10 years would be enough to wipe out a megafauna species in centuries.

Like their mammoth and sabertooth tiger counterparts elsewhere in the world, Australia’s megafauna were remarkable creatures. They were probably just always too fragile to survive humans seeing them up close for long.