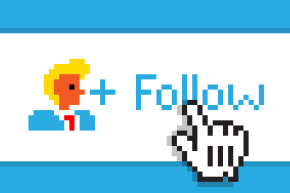 If you were one of the people vowing to unfollow the @POTUS and @FLOTUS Twitter accounts because you don’t like the Trumps, you won’t have to.

On Inauguration Day, the Twitter handles for the President of the United States and the First Lady were transferred Donald and Melania Trump. Since many users were sad that Barack and Michelle Obama were no longer in control and do not agree with Trump being in office, they began their protesting by saying that they were going to unfollow the accounts.

However, hitting the “unfollow” button wasn’t necessary, because Twitter renamed the Obamas’ old accounts to @POTUS44 and @FLOTUS44. That means that the @POTUS and @FLOTUS accounts Donald and Melania now own are new, and it’s up to you if you want to follow.

At the time of this article, the @POTUS account under Barack had more than 13.6 million followers and Trump has managed to get 5.27 million so far. The @FLOTUS account under Michelle had 6.5 million and under Melania it just has a bit more than 1.95 million followers. Both accounts are obviously expected to gain more followers over time. However, not everyone is rushing to follow the count like they did with the Obamas who’ve broken Twitter records with their tweets.

The Obamas are the first to get archived Twitter handles, since Bush was not on social media. The @VP and @WhiteHouse accounts will also be rebranded to @VP44 and @ObamaWhiteHouse. They will continue to have the same followers, following, likes and tweets since they’re not new accounts, rather just got their handles and names changed.

Neither Trump nor Melania have followed other Twitter accounts or liked anything yet, but Trump already sent out his first Tweet as president and it was his speech. It’ll be very interesting to see who the 45th President and First Lady first follow, interact with, and what they post.