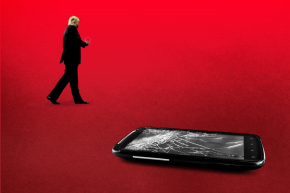 No more random chats when reporters or world leaders call

UPDATE: President Donald Trump is still using his “old, unsecure Android phone” to tweet, according to a report from The New York Times.  Tuesday night’s tweet saying he’d “send in the feds” to Chicago was reportedly sent from his personal smartphone, which is believed to be a Samsung.

Donald Trump will get a new title, house and Air Force plane. However, one of the most important upgrades he’s getting on Friday is a new phone. The 45th President of the United States finally ditched his Android smartphone and got a more secure, encrypted handset approved by the Secret Service.

It’s not clear what phone model Trump has acquired — or what software it uses — but it won’t be as easy to contact him as it was during the campaign. The new smartphone has a new number that only few people posses, according to the New York Times.

Trump’s old number was very accessible, and Trump often surprised aides with his casual chats with reporter, politicians, and even world leaders when they called. Now being a matter of national security, it’ll be harder for outsiders to get ahold of him with a random midnight dial.

Trump’s aides said last year, after the election, that Trump was worried about giving up his Android, which is the device he used to perpetually tweet offensive and outrageous things to politicians and other celebrities. Trump fears becoming isolated by not being able to keep in touch with his friends, according to his aides.

Presidents exchanging their phones is not new. President Obama had to give up his BlackBerry when he took office and was given a secure and encrypted model. Eventually, he had to give that phone up, too, and received an unknown, secure smartphone that sounds more like a 2003 flip-phone. Obama told Jimmy Fallon once that his super secure smartphone is “a great phone, state of the art, but it doesn’t take pictures, you can’t text, the phone doesn’t work, you can’t play your music on it.”

The Newseum asked the Trump administration to donate his old Android to the museum so it can be featured in an exhibit that chronicles the First Amendment and the evolution of electronic communication, but it hasn’t heard back.