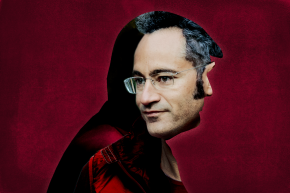 They fear that Palantir, founded by Trump advisor Peter Thiel, could help target immigrants or Muslims

A day before the inauguration, protesters have gathered outside the offices of Palantir Technologies, a controversial Silicon Valley data mining company that has been criticized for profiting off U.S. government surveillance programs and its ties with president-elect Trump’s incoming administration.

The protest, which brought a crowd of around 60 people on Wednesday morning, according to Buzzfeed, is part of a campaign to pressure companies not to collaborate with the incoming Trump administration. Trump has at various points promised to build a database of Muslim citizens, conduct mass surveillance on mosques, and target immigrants for mass deportation, leading thousands of tech employees to send letters of protest to their employers and pledge to never help his administration accomplish its goals.

“We will not stand by idly while our fellow technologists facilitate inhumane policies against people based on their national origin, religion, gender, etc,” the group wrote on its website. “We seek to hold technology companies and technology leaders accountable, particularly when they are directly collaborating with the government and have a profit incentive to continue to do so.”

The organizers described the campaign as an extension of the “Never Again” pledge, in which thousands of tech workers signed an ethics statement promising to refuse any work that would help Trump build a database of Muslims.

If Trump follows through on those plans, privacy experts have told Vocativ that, rather than a secret surveillance order aimed at tech companies, it’s likely the administration could simply buy access to the massive troves of profiling data already gathered by data brokers and firms like Palantir. Some data brokers have explicitly said they would not help Trump build a Muslim registry, while others have given Vocativ and other outlets vaguely-worded responses. Others have refused to clarify their position, including Oracle, which owns the data broker firms Datalogix and BlueKai, and whose CEO, Safra Catz, sits on Trump’s transition team.

The protestors are targeting Palantir because the firm is especially well-positioned to profit from any surveillance plans. Its founder, the billionaire entrepreneur and aspiring vampire Peter Thiel, has donated $1.25 million to Trump’s campaign and is now serving as an advisor on Trump’s transition team.

The surveillance firm also has close ties with U.S. intelligence and law enforcement agencies, making more than $130 million from U.S. government contracts in 2016 alone. The company already provides the government with two major surveillance systems called FALCON and AFI, which are used to compile and analyze dossiers of people that include their social relationships, employment histories, families, and more. The FALCON system is used by the Department of Homeland Security’s Immigrations and Customs Enforcement (ICE), helping the agency deport more immigrants under Obama than under any other president in history. Trump has promised to expand the agency.

In a recent interview, Palantir CEO Alex Karp said that his company has not been asked to help build a Muslim registry and that it would refuse to do so.

“If we were asked, we wouldn’t do it,” Karp told Forbes last week. “No one has asked us. Again, I don’t believe anyone would, but if asked I would have given the same answer I gave internally.”

But even if data brokers and surveillance companies like Palantir promise not to actively “help build” such a database, the services they provide the government include access to raw data that can be sorted based on peoples’ political or religious beliefs. Using powerful machine learning algorithms, similar systems created by Facebook and Google can easily analyze a person’s activities and social connections to determine demographics such as income, age, race, and religion.