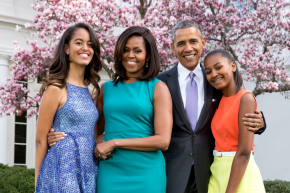 Already Miss The Obamas? How To Keep Up With Them Once They Leave
By Alejandro Alba

Already Miss The Obamas? How To Keep Up With Them Once They Leave

They may no longer be reached @POTUS and @FLOTUS, but they’ll still be online

The first “social media president” and first lady are leaving the White House on Friday, and with it, they leave behind their social media accounts and all the great tweets, photos, and blogs they shared over the past eight years.

The White House staff released a digital transition outline this week that explains exactly how the departing Obama administration will hand off all social accounts to the incoming 45th president of the United States and company — which is probably a bit concerning given Donald Trump’s terrible track record with offensive and unhinged tweets on his personal account.

Barack and Michelle Obama will have to give up the popular @POTUS and @FLOTUS Twitter accounts and pass them on to president-elect Trump and first lady-elect Melania Trump. If you’re worried about the Obama’s social media presence coming to an end, don’t. They will continue to tweet from their old accounts @BarackObama and @MichelleObama once they leave office.

They’ll also continue to engage with their followers on Facebook and Instagram, and it’s very easy to look them up on both platforms. Michelle is also a big user of Snapchat, so those who love playing her snaps about being healthy and active can continue to follow her at @MichelleObama. Will you miss Biden’s witticisms and gaffes? Vice President Joe Biden and his wife Dr. Jill Biden will also continue to socialize on Twitter and Facebook under the handles @JoeBiden and @DrBiden, respectively.

While in office, Michelle and Obama shared a lot of great memories with their more than 20 million cumulative Twitter followers. The president’s handle currently has more than 13.6 million followers and the first lady’s has more than 6.5 million.

The most memorable social moment from the Obamas was a photo the President tweeted after his re-election on November 2012 captioned “Four more years,” in which he’s embracing Michelle and displaying nothing but happiness. The photo broke the “most retweeted photo” record on Twitter with about 780,000 retweets. Ellen DeGeneres then beat that record with her Oscar selfie.

President Obama also broke records with the first ever tweet from the @POTUS account, which acquired the Guinness World Record for fastest million follower count.

Another memorable social media post from the White House was Michelle’s last Instagram post, which is dedicated to Barack and captioned, “Being your First Lady has been the honor of a lifetime. From the bottom of my heart, thank you.”

Being your First Lady has been the honor of a lifetime. From the bottom of my heart, thank you. -mo

All tweets and media shared by Obama and Michelle while using @POTUS and @FLOTUS will be archived under new Twitter handles @POTUS44 and @FLOTUS44. Bidden will also get his @VP tweets archived under @VP44. The same handles can be used to find archived posts on Facebook, Instagram and Medium.

All tweets that were published under @WhiteHouse handle over the past eight years will be archive under @ObamaWHiteHouse.