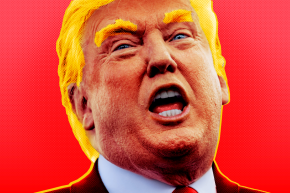 Conspiracy theorists are seizing on the fractured landscape surrounding Donald Trump’s pending presidency to drum up panic, drive page views, and promote their theories on sinister plots planned by global elites. So far, they’re doing a hell of a job.

Six of the 10 most popular YouTube videos uploaded in the last week with the keyword “inauguration” are bogus reports and prognostications made by longtime purveyors of fake news and misinformation, a Vocativ analysis found. Drawing on everything from planned protests on the left and celebrity tweets, to recent news stories and liberal boogeymen, these videos all but assure their viewers that the fix is in on Friday, when Trump takes his oath of office. Combined they’ve attracted more than 2.2 million views.

“They’re getting ready to green light rogue groups arresting him or killing [Trump],” said radio host and conspiracy theorist Alex Jones during a recent broadcast in which he claimed — emphatically — that he had confirmed that the CIA planned to stop Trump from assuming office. More than 350,000 people have since streamed the warning made by the rabble-rousing Jones, who also believes that the Sandy Hook shooting was a hoax and 9/11 an inside job.

Jones’ InfoWars channel was not the only conspiracy-minded outlet to get a boost from tapping into the inauguration. YouTube user Jason A, whose prior work includes reports on Hollywood’s “Satanic Illuminati,” racked up more than a million views with a montage of George Soros headlines and assorted news clips that suggest Trump’s swearing-in ceremony could come under siege.

Several other channels used a tweet by Rosie O’Donnell urging “martial law” and news of nationwide demonstrations to predict that leftists plan orchestrate the largest riots in American history. And don’t even get these conspiracy theorists started on the news that the Army general who was to oversee the D.C. National Guard during the inauguration will step down from his post in the middle of the ceremony.

“It’s a huge vulnerability. It’s a red flag,” warned the hosts of Truthstream Media in a video watched nearly 340,000 times. “It’s almost exactly what happened in Dallas the day JFK was killed.”

News reports, however, suggest that the departure of Major General Errol Schwartz during the inauguration was a decision initially made by the Trump transition team.

So what’s with all the hysteria? Watch the videos and find out.

"George Soros lost nearly $1B after the election."

"They’re getting ready to green light rogue groups arresting him or killing him."

"This is someone blatantly calling for the endangerment of people's lives and taking over basic rights because they are so butthurt that Trump won."

"Facts do not matter. They want to stop Donald Trump no matter what."

"It's a huge vulnerability. It's a red flag... it's almost exactly what happened in Dallas the day JFK was killed."

"It's very scary. And a very real potential scenario."

As for the hundreds of planned protests around the country? Organizers insist that they will be peaceful demonstrations. Meanwhile, Soros, O’Donnell, and the CIA have remained mum on whether they plan to hatch a coup or incite a wave of violent uprisings in the streets.