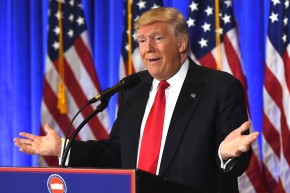 Betting Sites Play The Odds On A Trump Impeachment

Irish bookmakers have placed odds on Trump getting kicked from the White House, his inauguration speech, and more

Will Donald Trump be impeached in the first six months of his presidency? Judging by the odds on one betting site, it’s not the least likely thing that could happen.

As Washington prepares to inaugurate a new leader of the free world, the sometimes controversial Irish bookmakers at Paddy Power are currently offering several different wagers — some serious, some outlandish — surrounding Trump’s first term as president.

The aforementioned impeachment offering is currently going off at 4/1, meaning someone who wagers $100 would come away with $400 in the event that Trump gets booted from the White House. Other “Donald Trump Specials” include whether the alleged golden shower footage will appear online (5/1), if he’ll split from his wife Melania in 2017 (16/1), and an extreme longshot — if he’ll paint the entire White House gold (500/1). Trump’s first state visit? Russia, of course, is the early favorite at about 1/1 with Ireland, the home of one of his beloved golf courses, coming in slightly behind at 3/2.

You can also bet on the actual inauguration itself. Want to place some cash on the color of Trump’s tie? Red is the overwhelming favorite there. Think you can pin his exact skin color? You should absolutely not bet on this, but if you’re ever so inclined, cinnamon, pumpkin, and carrot are a few options.

Paddy Power is quite familiar with Trump’s unpredictability, at least in a gambling sense. Three weeks before the election, the bookies were so confident in a Hillary Clinton victory that they actually prematurely paid out her bettors, a sum totaling more than $1.1 million. We all know how that ended.