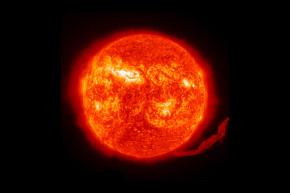 How A Massive Solar Storm Could Wreck The Global Economy

Sure, the sun gives us all the energy and warmth that we need to exist, but that doesn’t mean it can’t also be a total jerk. Case in point: A powerful release of particles and plasma known as a coronal mass ejection could wreak unimaginable havoc if it hits the planet, frying the electrical grid and leaving entire regions stuck in an indefinite blackout. And depending on just where such a solar storm hit, a new study estimates it could cost nearly $50 billion in a single day.

Solar storms of that magnitude are rare, but hardly unheard of. A powerful storm known as the Carrington event would have cost the United States alone perhaps more than two trillion dollars if it had happened today instead of in 1859. The sun did even undergo just such a powerful coronal mass ejection in 2012, but it thankfully missed the Earth. Though it’s not the sort of thing likely to happen tomorrow, the odds are that it’s a matter of when, not if a serious solar storm hits our planet and knocking out our energy infrastructure, possibly doing permanent damage to transformers that aren’t easily replaced.

A team of British researchers estimated just how serious the economic impact could be if a storm hit different parts of the United States. Depending on how storm’s strength and the Earth’s position at the time, the resulting blackout could affect either relatively narrow bands of the country or the entire U.S. outside of the southern states. In the most optimistic scenario, only the most northern states are affected, but even that would cost about $7 billion dollars a day in lost economic activity until power was restored.

The situation only gets worse with a solar storm that is localized on the center of the country, or a particularly powerful one that takes out most of the country. Then, we’re talking about a daily economic cost between $40 and $48 billion. And while losing the gross domestic product of Bulgaria on a daily basis is bad enough, the researchers didn’t even consider how much worse things could get on the second or third day of a mass blackout. By then, the economic impact would have spread beyond the United States and its closest trade partners, such as China, Canada, and Mexico, to more distant connections like Australia and the rest of Asia.

If a blackout of that magnitude stretched into several days, losing $50 billion or more a day would probably end up being the least of our worries, as social chaos followed. So, yes, even if the next big solar storm is decades away, this is probably something to start preparing for.