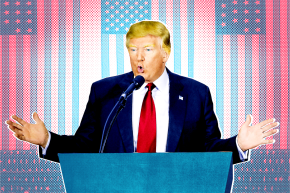 The First Words To Ever Appear In An Inaugural Speech

The inaugural address is one of the most deeply-rooted American traditions associated with the peaceful transition of power. The entire nation found itself hanging on the every word of a man who is arguably the most non-traditional, openly hostile now-president in history to witness how he would corrupt the tradition.

What Donald Trump’s staff promised in the days preceding the historic moment was a largely traditional speech in many ways: it would center around the theme of unity and run roughly 20 minutes in length. What we expected was something a little more characteristic of the blustery man who was elected following a campaign of division, scandal, and controversy. What we got? A speech that was somehow both at the same time.

When it comes to speeches that will forever be recorded in the annals of history, word choice is everything. There’s a proverbial script that must be followed in terms of thematic material, which is why so many inaugural addresses bear resemblance in terms of their most-used words.

More notable than the cliched catchphrases and vague references to democratic ideals is the way that presidents choose to deviate from the norm. Barack Obama made history by becoming the first U.S. president to reference the LGBTQ community in his 2013 speech, saying, “Our journey is not complete until our gay brothers and sisters are treated like anyone else under the law—for if we are truly created equal, then surely the love we commit to one another must be equal as well.” Ronald Reagan was the first to ever utter the word “terrorism” in his.

Trump, by comparison, became the first president to ever use the word “carnage” in an inauguration speech, and he did so in reference to poverty, closed-down factories, the public education system, crime, gangs, and drugs. He was also the first to specifically mention the “inner cities,” an outdated phrase he has used time and time again in reference to bringing back unconstitutional practices like stop-and-frisk. He also used the phrase “radical Islamic terrorism,” one that politicians on both sides of the aisle refuse to use for its conflation of a religion and the acts of specific individuals with motives that can vary. This kind of negative language is a huge departure from the time-held tradition of optimism and unity. Other words he used that were added to the inaugural address vernacular included disrepair, stolen, sad, trapped, and tombstones.

In some ways, Trump’s speech did follow in the traditional format, as broken down by the Washington Post four years ago. It began with a greeting, addressed the state of the nation, and outlined the issues he feels most significant. But where Trump diverged was in the general populist message of anti-establishment principles, echoing only Reagan, whom his speech could probably be best compared to despite its overall unique nature.

In stating, “a small group in our nation’s capital has reaped the rewards of government while the people have borne the cost,” and “the establishment protected itself but not the citizens of our country,” he was notably more radical than Reagan, who declared “government is not the solution to our problem; government is the problem,” back in 1981.