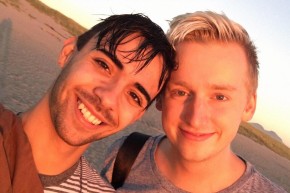 How Ex-Mormons Are Defying The LDS Church With Selfies

Over the last week, hundreds of former members of the Church of Jesus Christ of Latter-day Saints have posted photos of themselves on an ex-Mormon corner of Reddit in an act of rebellion, a celebration of freedom from the restraints of the LDS Church, and an unshielded, open-armed welcome for people considering abandoning their faith.

The selfie movement began about two weeks ago on the ex-Jehovah Witness subreddit, but quickly spread to the largest ex-religion subreddit, /r/exmormon, which has more than 37 thousand subscribers. In the flood of posts, many images show people committing sins against the church — drinking beer and coffee, sporting tattoos and piercings, exposing shoulders and thighs, and celebrating same-sex relationships. But the biggest contradiction to the convictions that ruled their lives for years are the wide smiles on all their faces. “It’s an expression of joy as a statement of defiance against the toxic teachings we grew up in,” says Ryan McKnight, a former Mormon who is active in ex-Mormon communities. “I really believed when I was a Mormon that only Mormons were truly happy people — that everyone else went home and wallowed in despair every night and had to drink away their sorrows. It’s a total mind-trip that makes it harder to leave.”

McKnight was one of the first ex-Mormons to post his selfie on the subreddit. He is the founder MormonLeaks and has played an instrumental role in several leaks which have exposed the inner workings of the church. Perhaps most notably, he helped leak a November 2015 church policy change that prevents children of same-sex parents from joining the church until they turn 18 and disavow their parents’ relationship.

That anti-LGBT policy inspired thousands of church resignations and a rapid growth in the online ex-Mormon community. Many of those members resigned still believing that doing so meant never finding real happiness. The flood of selfies this week is proof that their fears were misguided.

I left the church behind 2 years ago and met this boy soon after that. I’m out of the cult and out of the closet, and I’ve never been happier in my entire life! 🙌🏼❤️ from exmormon

“The selfie movement gives a face to these people who are often discounted, or assumed to be living a lifestyle that is ‘wrong,'” Davis Hilton, who posted the above selfie with his boyfriend, told Vocativ. “Maybe it’s less of defiance and more of a, ‘Hey, I’m here and I’m good. I’m a human too!’ We all deserve happiness. And we should be glad to see others enjoy their own happiness, even if their life is different from ours.”

Some people of color posted photos of themselves along with a statement of pride for “not being white and delightsome” — a reference to a racist scripture in earlier versions of the Book of Mormon that was attached to the idea that non-Caucasians are cursed. Early Mormon prophets taught that with righteousness came a lightening of the skin. A 1981 revision of the holy scripture changed the phrasing to “pure and delightsome.” The church has attempted to soften and abandon disparaging rhetoric, but many members of color still feel the lingering effects of a history of overt racism.

The /r/exmormon subreddit has long been a safe haven and a support group for Mormons struggling with the transition to a new way of life. The anonymity makes it easier for people who are considering leaving to ask questions about what life is like outside of Mormonism. It also helps the active posters from getting harassed by current members. But faceless encouragement and affirmations have their limits. The sight of a beaming, open ex-Mormon could be the nudge that some hesitant members need.

Some selfie-posters hid their faces or only posted illustrated self-portraits or parts of their body because they still need some anonymity. One redditor posted a quiz inquiring why some members of the community weren’t posting photos. About 220 people voted that they were afraid it could harm their relationships with family and friends; about 70 voted that it could harm their career.

For many, this has been a significant step toward coming out. “There is a very real risk of losing family and friends when you come out as an unbeliever,” /u/ayecapnx, who posted a selfie but did not want to reveal his name, told Vocativ. “We post on Reddit with anonymous usernames. We scrub personal information. We delete accounts and recreate them. All in an effort to make sure our comments don’t get back to anyone in the real world. We can vent on Reddit in ways we never could in out real lives without very real consequences. The selfies are a lot of us saying, ‘You know what? I’m tired of being afraid. Come and get me. You can’t get all of us.'”

The LDS Church declined to comment on whether or not it teaches that non-members are incapable of finding happiness. But the church web sites hosts several lectures on the topic from prominent church leaders. “Leaders of the church have branded those who leave as sinners and quitters,” Paul Foster, one of the selfie-posters, told Vocativ. “I think there is value in standing up against those statements and showing that the Mormon church doesn’t hold a monopoly on happiness. My hope was that someone would view my picture and the others; see me as a normal person, happily married, living a normal life.”

The trend began on /r/exmormon on January 18, when /u/DavieB68 posted: “My wife and I been out 2 years, never been happier. Be yourself ✌🏻.” But as he points out, he was inspired by the ex- Jehovah’s Witness subreddit, /r/exJW, where users have been posting hundreds of selfies over the last couple weeks. Selfies became so popular that they had to create a separate subreddit, /r/exjwseflies, just to clear up the homepage for non-selfie posts. These Jehovah’s Witness “apostates” are driven by similar reasons as the ex-Mormons — challenging the notion embedded in their former religion that leaving leads to shame and sadness.

The respective movements have prompted cross-posting between the two communities as they cheer each other on. One ex-Mormon redditor even invited /r/exscientology to join the “exreligion selfie party.”