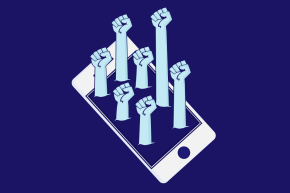 How To Protect Your Phone Before The Inauguration Protests

Before you go, make sure your phone's data and communications are secure

On Friday, Donald Trump is inaugurated as the nation’s 45th president, ringing in a new era of protest as much as politics. On Saturday, the Women’s March on Washington alone has more than a quarter million attendees of all stripes of people, who either oppose Trump or want to make a stand for women’s rights, committed on Facebook.

At any large protest, law enforcement is often monitoring those who attend, likely in large part through their smartphones. You could be under surveillance, and there’s always a chance you’ll get arrested, even if you don’t do anything wrong. So if you plan to go to protests on Inauguration weekend, here’s a guide for how to prepare your phone.

Unless you and every single one of your friends and contacts at the protest have an iPhone, download Signal — it’s free! — and verify each other’s keys before you go.

Signal is by far the most acclaimed encrypted messaging app. It’s common for police in many major American cities to use a device called a “stingray,” which mimics a cell phone tower to track locations and sometimes intercept text messages. Washington, D.C. is no exception, and protests are a common place to deploy them.

Signal uses strong end-to-end encryption, meaning only your phone has the key to decrypt what your friends send you. You’ll probably never know if your texts were intercepted by a stingray — but if you use Signal, all police would be able to see is a garbled message.

2. Install the latest operating system on your device

If you’re ever annoyed with frequent operating system updates, keep this in mind: No programmer is perfect, and code can contain flaws that are easy for hackers or governments to exploit. A major reason companies like Apple and Google push for upgrades is to fix potential security holes.

You’ll also want to make sure your device has full disk encryption enabled, so that if police seize your phone, only someone with a password would be able to access its contents. Fortunately, if you have the latest version of the iPhone or Android operating system, full disk encryption is automatic if you’ve locked your phone. Which means, by the way, you should lock that phone.

3. Lock your phone with a passcode or pattern — not a fingerprint.

Creating a passcode so that no one who ends up with your phone can access what’s on it is a no-brainer. And like above, doing so on an updated iPhone or Android will encrypt your device when you’re not using it.

But despite the ease of use, don’t take advantage of a new iPhone’s ability to let you unlock your phone with a fingerprint. Police can compel you to use your fingerprint to get at what’s in your phone, but not to give up your passcode or pattern.

Make sure your pattern is fairly complex, too — six digits for a pin, or a long string for a pin pattern. Police often have access to fairly sophisticated technology to rapidly try to guess your login, but just like with a text password, the longer it is, the harder it is to crack.

4. Turn off GPS and WiFi

You’re there to protest, not to catch a signal to stream video or play Pokemon Go. Both GPS and WiFi broadcast your phone’s signals and location.

5. If possible, put your phone on airplane mode

Again, stingrays, which will almost certainly be used at the protest, spoof a cell tower so that your phone will connect with it. The best way to avoid that fate is to not have your phone be looking for a tower. It may not be realistic to go without texting or calling while you’re marching. But if it is, airplane mode keeps you a little safer while still allowing you to film and take pictures.

About photos: When dealing with police, it is legal to film and take photos of police in public places.

That’s not to say every officer in the country will be happy about it, or even that they all know this law. But keep at least some distance. It’s not legal to interfere with police activity, and you don’t want to give an officer an excuse to stop your documentation.

Do not give up access to your phone without speaking to a lawyer.

Police can confiscate your phone if you’re arrested. But they’re not allowed to access its contents without your permission. Thanks to a Virginia Circuit Court ruling, an officer cannot compel a citizen to give up her passcode. But police can insist you place your finger on your phone to unlock it — so again, make sure that option is disabled and replaced with a passcode.

There’s no such thing as perfect security. But follow these tips, and you’ll minimize the government’s ability to track you at protests.