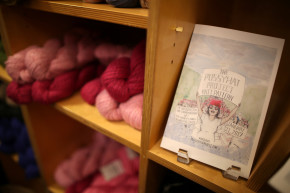 When Elsie Hay Cook posted a joke to her Facebook knitting group — depicting a pair of tiny little gloves and a caption wondering if the post office had a small enough box so she could send them to the famously small-handed Donald Trump for his inauguration — she was stunned by the attention that came from the viral moment.

“I brought this on myself, never dreaming anyone would pay any attention to my attempt at humor in a Facebook group for knitters,” Cook told Vocativ.

Cook has been knitting since she was 8 years old — over 70 years ago — but she doesn’t have as much opportunity to do it as she’d like. The “addicted knitter” lives in Houston, which isn’t exactly known for having sweater weather. Her only outlet, knitting-wise, is for her grandchildren who live in Oregon.

Other than that: “I have dozens of lacy knitted starched cotton placemats stored away for dinner parties — in case I ever have another one,” Cook says.

Then came the Women’s March on Washington and its “Pussyhat Project” — pink knit hats with cat ears for marchers to wear — and Cook, a long-time “liberal Democrat,” had a new project. She knitted several pussyhats and posted a photo of her work to a large Facebook group called “Addicted to Knitting…….”

“My post got so many comments that the administrator of the group shut it down after an hour or so,” Cook says.

A few days later, she decided to post another photo, this time with “a little inauguration humor.”

“All hell broke loose,” Cook says. Her post found its way onto Twitter on Sunday, along with a colorfully worded caption from the tweeter.

fuck him up elsie pic.twitter.com/wx6Qdxdad1

As it happens, Cook didn’t knit the tiny gloves — she just found the photo — but the caption that really makes the joke is all hers. Just like before, the post was so popular so quickly that an administrator turned off the comments. Cook notes that Addicted to Knitting……. is “NOT a place for political posts.”

“I guess I broke the rules, although I did not mention politics,” Cook says. “As Flip Wilson used to say, ‘The Devil made me do it!'”

The tweet about Cook’s post has been retweeted tens of thousands of times (according to her son, Cook has a Twitter account but she’s never tweeted), making her a sudden and unexpected viral knitting star. Cook admits to being a “a little shellshocked” over the fuss, but if things get too overwhelming, she can always escape to her knitting: She’s currently working on a new pussyhat, her eighteenth.