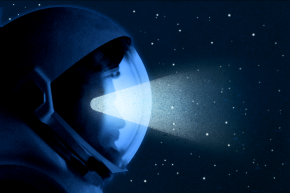 Never mind the cosmic radiation or the damage to the spine: The most pressing problem for any astronaut traveling to Mars might be their eyes. Fifteen NASA astronauts have already reported significant, sometimes permanent vision damage after long trips to space, and there’s not much point in sending the first humans to Mars if they can’t see it when they get there.

But now scientists think they have figured out what’s causing the problem — and, hopefully, how to prevent it — and all their research needed were cancer survivors willing to take a bunch of zero-gravity flights.

Space has a way of bringing out concerns we rarely worry about on Earth, and in this case it’s the fluid that moves around our bodies. While being upright during the day, fluid is naturally pulled down toward the feet, but while lying down during sleep it’s concentrated in the head, building up pressure behind the eyes. That’s no big deal when people are only sleeping for a third of the day, but it turns out zero gravity is the equivalent of constantly lying down. The pressure never lets up, and over time that can distort the shape and function of the eye, creating the vision problems that have already affected some astronauts on the International Space Station.

Researchers at the University of Texas Southwestern Medical Center found the problem comes from the disruption of the day-night pressure cycle we take for granted. It had barely even been considered an issue in space medicine before now. To work all this out, they had to go to some remarkable lengths, recruiting eight cancer survivors who had previously had what’s known as an Ommaya reservoir implanted in their head as part of their chemotherapy.

That implant made it uniquely possible to measure tiny changes in the pressure behind their eyes in zero gravity. Volunteers had to take a ride on what’s affectionately known as the Vomit Comet, a special NASA flight on Earth that uses a steep, parabolic path to create temporary zero gravity. If nothing else comes out of this study, we’ve at least identified eight of the most hardcore volunteers in the history of medical science.

Now that the researchers have figured out just what causes the problem, it’s possible to prevent it. What may end up happening is astronauts essentially flip how the pressure balance works on Earth. During the day, astronauts will live and work in zero gravity, with the pressure on their eyes similar to that experienced when people on Earth are lying down. When astronauts go to sleep, however, they could wear special clothes or devices that create negative pressure, recreating the experience of being upright.

Such devices do exist and have been shown to work for 20 minutes at a time, but eight hours could be more of a challenge. Solving it is one more small but necessary step on the road to Mars.