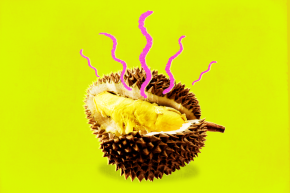 Few foods reveal the difference between taste and smell quite like the durian. This East Asian fruit has a sweet taste that has earned it a reputation as a delicacy — assuming you can get past the smell. Many people, especially westerners unfamiliar with the fruit, are repulsed by the durian’s odor, described as anything from rotting eggs to raw sewage. This is also why some East Asian countries have banned it on public transit. But just what unholy mix is behind the world’s most malodorous food?

That’s what three scientists at the German Research Center for Food Chemistry recently set out to discover, shipping a dozen durians from Thailand to Bavaria in the name of science. Chemical analysis allowed them to produce a simulation of the durian smell, and it’s a rich tapestry. Nineteen different chemicals play a role in creating the fruit’s complete odor, although the researchers found that people could still recognize the smell of a durian when just two of the strongest chemicals were used.

The durian smell is an unholy mishmash of several different odors. Several of the chemicals do create a fruity smell, explaining why plenty of people like the durian fragrance just fine, but other chemicals create whiffs of what the researchers describe as skunky, sulfury, like that of both rotten and roasted onion, and a couple more that just generally smell rotten. There are some nicer smells mixed in there to complement the fruity fragrance, including honey, caramel, and, uh, cabbage and soup seasoning, but this is one giant olfactory mess.

According to the researchers, part of the reason the durian smell is so striking is that some of the odors from the individual chemicals are unusually intense. In particular, the chemical responsible for its fruity smell and two more that lend it an onion-like odor are much stronger than in typical food. Even if those particular chemicals aren’t responsible for all the smells people find so objectionable about the durian, those powerful, intense odors mean the durian’s smell is pretty much impossible to ignore. And once that first whiff is detected, there’s plenty of time to smell all the other, more subtly trash-like odors.