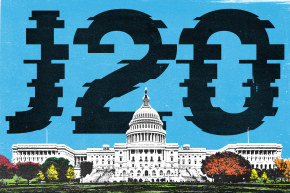 Six days before Donald Trump takes his oath of office, a group of activists met to plan how they'll voice their opposition

Six days before Donald Trump’s inauguration, dozens of people — from college students to gray-haired hippies — gathered in a classroom at American University in Washington D.C. to listen a lawyer offer tips on how to handle getting arrested.

A woman in her late 30s raised her hand. She was worried that, since she’s a teacher, an arrest could get her fired and maybe hurt her chances at landing another job.

“We’ve had teachers get arrested,” the lawyer said. “It’s not the end of the world.” That’s likely reassuring, since for many of those in attendance, the kind of disruption that could end in arrest is the goal.

The morning’s legal training session was one of several classes offered by a group of anti-Trump activists calling themselves DisruptJ20 — “J20” standing for January 20. The event was a training camp of sorts for protesters aiming to “shut down” the nation’s capitol during president-elect Donald Trump’s inauguration on Friday.

The intentions of those gathered made the university hosting the event eager to keep the activists at arm’s length — American made it very clear that it is not affiliated with DisruptJ20, and those who attended the seminar were asked to sign a waiver alleviating the university of any potential legal action that might stem from hosting a conference where people are essentially trained to break the law.

“American University is concerned that aspects of this program involve training participants to take actions at the inauguration that could potentially put them in harm’s way and disobey the law,” said Kelly Alexander, an American University spokeswoman.

Judging the day’s agenda and the interests of its participants, her concerns — that laws may be “disobeyed” — seem well-founded.

“We’re bringing widespread civil resistance to the streets of Washington DC through protests, direct actions, and even parties,” said Legba Carrefour, a DisruptJ20 organizer who has been involved in what he calls “radical activism” for about 20 years. In a previous interview, Carrefour told Vocativ, “We’re not just organizing some boring-ass march — we want direct action.”

DisruptJ20 is not a single entity; it serves as an umbrella organization aimed at helping other groups and individuals organize against Trump. So far, at least 91 different groups have signed on to be a part of DisruptJ20, including several anarchist groups and anti-fascist organizations across the country.

At 9:30 a.m. that Saturday, around 100 men and women gathered in the lobby of the university’s School for International Studies building, signed a legal waiver and dispersed to various classes across the campus. They trickled back there for lunch, where “vegan potatoes” were served, and some of the older participants shared stories of actions and arrests at protests decades ago, seeming to impress some of the younger attendees.

Alongside the legal class, sessions looked at the effectiveness of road blockades, bystander intervention, how to deal with police if/when protesters are arrested, and “direct action training.” When asked how they define that last term, an organizer pointed us to a Wikipedia page, where it’s described as a protest method that “can include nonviolent and less often violent activities which target persons, groups, or property deemed offensive to the direct action participants.” (The definition on the DisruptJ20 website is a little milder — it doesn’t mention “violent activities.”) Nothing violent was suggested or planned in the sessions Vocativ attended, but nor was it explicitly disavowed.

In a another classroom, dozens of activists sat in on a seminar by blockade expert L.A. Kauffman about the effectiveness of past actions in D.C., like the May Day blockade in 1971 protesting the war in Vietnam.

Of that protest, Kauffman said that the organizers chose blockades because they “wanted it to be non-violent but they wanted it to have an edge to it.” Approximately 12,000 people were arrested that day in 1971.

“Have your affinity groups, and pick your targets,” Kauffman advised.

The morning’s legal seminar took activists through the booking process in D.C. and offered advice on what to do if someone were to end up in police custody. Tips included carrying at least $100 in cash, having enough essential medications in their original bottles to last three days, creating password-protection for phones to protect against searches, and writing the phone number to DisruptJ20’s legal resource center on your arm.

The attorney leading the seminar assured the activists that the D.C. police have a lot of experience dealing with protests and generally do good work. When confronted by police, the attorney offered a list of dos and don’ts — the “do” list included keeping your hands in plain view and videotaping the interaction with law enforcement. The don’ts include touching an officer and doing anything to escalate the situation like yelling or using profanity.

Several people in the seminar gave tips on how to continue to be disruptive even after an arrest. In previous cases of mass-arrest, activists have given authorities fake names, like the names of people detained at the controversial Guantanamo Bay prison facility, or all give the same name — for example, those arrested could each say “I am Troy Davis,” a Georgia man whose controversial execution in 2011 sparked significant protest.

More Trump Spurned By Dozens In Congress Not Attending Inauguration

On Friday January 20, hundreds of thousands of people will gather in D.C. to see Trump sworn into office, along with Congress (minus the several dozen who are boycotting), past presidents, and various other high-profile guests.

First thing that morning, activists will gather at the DisruptJ20 “staging area” at McPherson Square, just north of the Capitol Mall, where Trump will take the oath of office at noon. The activists have planned marches, permitted protests, and other unpermitted protests, including a 10 a.m. “anticapitalist march” on Logan Circle.

“Colorful disruptions will occur right at the Inaugural Parade Route,” DisruptJ20 organizer Lacy MaCauley said. DisruptJ20 organizers, she said, “have identified twelve checkpoints that participants will have to pass through in order to attend the inaugural festivities.” At each checkpoint there will be “issue-specific protest(s)” on issues ranging from racial justice and immigrant rights, to climate politics and drug policy.

The group also plans to create early morning blockades on the highways in D.C. with the hopes of causing as much chaos as possible.

It’s not just the cops who are keeping their eyes on DisruptJ20.

“Yeah, if you had… a pint of butyric acid, I don’t care how big the building is, it’s closing,” a man who O’Keefe identifies as Luke Kuhn, a leader in the D.C. chapter of the Anti-fascist Coalition, is heard saying in the video. Another activist, who O’Keefe identified as Scott Green, added, “and this stuff is very efficient — it’s very, very smelly, lasts a long time and a little of it goes a long way.”

DisruptJ20 organizers claim they knew the person recording the video was working against them and that the stink bomb story was a “false flag.”

“False plans were discussed with [O’Keefe plant] Tyler,” DisruptJ20’s Lacy MaCauley said in an email. “They spoke of false plans in order to protect themselves, and did not discuss any real intentions.” She went on to call O’Keefe’s actions “laughable.”

In another secretly recorded video released by O’Keefe, activists associated with DisruptJ20 are seen talking about “throat punching” neo-Nazis if they get “very loud with their views.”

If the things in O’Keefe’s videos were a ruse, the organizers are still worried about right-wing opposition to their Saturday plans. After getting prior permission to attend from the event’s press team, this reporter was removed from a session on Saturday and asked to leave.

DisruptJ20 organizers hope that their massive mobilization of protesters will set a tone of resistance for Trump’s presidency — one where people don’t simply stand by as he implements the policies he pushed on the campaign trail, many of which are controversial or borderline unconstitutional.

“In my 20 years of doing radical activism I’ve never seen an uprise, or a social unrest like I have with this,” Carrefour said. “And for good reason.”