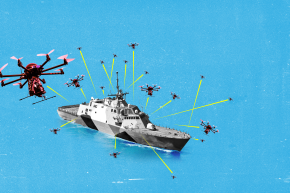 A week after the U.S. Department of Defense publicized its test of the world’s largest drone swarm, their research arm announced they are developing smart bullets that can defend against such a pack of flying robots.

Drone swarms — multi-robot systems that “think” and move as a single unit — have long been fodder for science fiction, perhaps most recently in the Black Mirror finale in which surveillance drone bees are hacked and reprogramed to attack American citizens.

But it wasn’t until a January 8, on a CBS segment demonstrating a Pentagon-developed swarm of 104 autonomous drones, called Perdix, that many Americans were even aware that drone swarms could be a modern-day threat.

“Due to the complex nature of combat, Perdix are not pre-programmed synchronized individuals, they are a collective organism, sharing one distributed brain for decision-making and adapting to each other like swarms in nature,” said DoD strategic capabilities office director William Roper, in a statement the following day. “Because every Perdix communicates and collaborates with every other Perdix, the swarm has no leader and can gracefully adapt to drones entering or exiting the team.”

Now we know the Pentagon is simultaneously creating weapons that could counter such swarm technology if used by adversaries. On January 16, DARPA, the military’s R&D arm, announced it is awarding an additional $8 million to Raytheon Missile Systems to develop a prototype of smart bullets that can attack several small, fast-moving weapons or crafts. These bullets are primarily intended to defend U.S Navy warships from drones and unmanned boats attacking from multiple directions. DARPA hopes that MAD-FIRE bullets will be able to track targets, adjust their path as targets move, and even strike a second time if targets survives the first hit.

DARPA has a penchant for giving its deadly programs cute or humorous names, but this one sounds like it was coined by a New Jersey college student: MAD-FIRE (Multi-Azimuth Defense—Fast Intercept Round Engagement System). According to a DARPA announcement, the goal of MAD-FIRE is to design bullets and accompanying technology that would have the precision of guided missiles along with the rapid-fire capability and speed of small ammunition.

Lockheed Martin and Raytheon both worked on MAD-FIRE concepts during the first planning phase of this program. Raytheon’s initial contract was $17.2 millions and Lockheed’s was $8.4 million. So far, Raytheon is the only company to get a contract for the second phase of actual development. Lockheed could still receive a Phase 2 contract.

Of course, once this technology is available it’s likely only a matter of time before smart bullet technology becomes available to civilians.