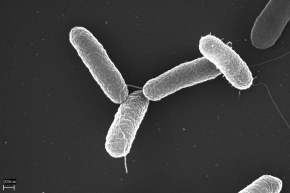 For all the bad press that Salmonella gets as a food-borne germ, a group of scientists are hoping that, with a few genetic edits, we might be able to use it to help fight off the deadliest of brain cancers.

Duke University and Georgia Tech researchers genetically modified a neutered version of Salmonella typhimurium, one of the strains commonly responsible for 1.2 million Salmonella cases annually. They then injected it into the brains of lab mice that were given transplants of glioblastomas, the most aggressive form of brain tumor. The bacteria were altered so that they pumped out two cell-killing compounds, Azurin and p53, but only when they were in a low-oxygen environment. Since cancer cells churn through oodles of energy and oxygen to grow as fast as they do, the team hoped the bacteria could easily hone in on them and spare healthy cells.

Their results, published in December in the journal Molecular Therapy: Oncolytics, were certainly intriguing, if still early, considering how fatal glioblastomas tend to be. Twenty percent of the mice given the bacterial therapy survived for at least 100 days and went into remission, while the median length of survival for non-treated mice was only 26 days. In human terms, that might amount to 10 added years of life.

“Since glioblastoma is so aggressive and difficult to treat, any change in the median survival rate is a big deal,” said co-author and PhD student Jonathan Lyons in a statement. “And since few survive a glioblastoma diagnosis indefinitely, a 20 percent effective cure rate is phenomenal and very encouraging.”

The potential breakthrough for Lyons and his team came with another modification they made. Based on earlier promising research, scientists have tried to use Salmonella to goad the body into attacking itself, more specifically cancer cells, but the bugs never cooperated in real-world clinical trials. So the team bred their Salmonella to lack the ability to produce an essential enzyme called purine. Because glioblastomas make plenty of purine to spare, their edits turned Salmonella into a tumor-seeking microscopic missile. Better still, once the tumor was wiped out, so were the bacteria.

Brain tumors usually grow without a clear border, making surgery, the primary treatment, an often futile solution. Without being able to wipe out every single cancer cell, tumors can and do just grow back. Using Salmonella to sweep out the last bits of resistance or as a front-line treatment itself could in theory significantly help survival rates. It’s estimated that only 5 percent of patients currently diagnosed with glioblastomas survive more than five years, according to the National Brain Tumor Society.

Of course, lots of proposed cancer treatments dazzle scientists at first, only to peter out, especially when it comes to brain cancer. For the time being, Lyons and his team not only hope to replicate their work in the future with different, stronger cell-killing chemicals, but also figure out whether they can improve the Salmonella’s ability to reach tumor cells in the first place.