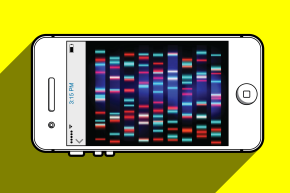 Your Phone Can Now Be Used To Sequence DNA, Detect Cancer
By Ed Cara

This Grocery Drives Itself To Your Door
By Ruby Nitzberg
Biology

Your Phone Can Now Be Used To Sequence DNA, Detect Cancer

Our phones may only be so-so at finding us a great date, but soon enough they might be able to sniff out germs and cancer cells — provided you outfit them with a nifty piece of tech developed by researchers from ULCA and Sweden.

The team’s device, created with 3D-printing and attachable to a smartphone, would allow lab techs to conduct DNA sequencing on the fly. In a test-run of its capabilities, the device measured up to standard tests that detect cancer cells from patients’ colon biopsies on a molecular level. The team’s findings were published Tuesday in Nature Communications.

“Molecular diagnostics at the point of care (POC) is currently by and large an unmet need in resource-limited settings,” they wrote in the paper. “Efficient management of a wide range of disease conditions is severely limited by the lack of molecular information.”

The attachment mostly builds upon the camera standard to modern cellphones, adding in two laser compact diodes for fluorescence imaging and a white LED for bright-field transmission imaging (used in simple light microscopes). It also comes with a moveable cup-holder for taking in samples, and uses machine learning algorithms to sift through the images taken and identify tumor cells by how the molecules in their DNA strands align compared to normal cells.

While its accuracy was fine enough, the scientists think there are ways to boost it further, possibly by adding a third diode or simply sampling more DNA at once. And though they used specially sliced frozen tumor samples — something that might be not available in less advanced areas — the team thinks their device could easily be adapted to simpler, quicker methods, such as by looking at tumor samples pressed onto a microscope glass slide. It can also act as a typical microscope, allowing someone to hone in on the bacterial culprit behind the latest outbreak, for instance.

Right now, the device still requires lab tech expertise to operate, but the researchers do think there’s room to further automate it so it can be used far and wide. In the meantime, it’s worth considering that the smartphone used for their pilot experiment, a Nokia Lumia 1020, was first released in 2013, meaning it might not take the latest iPhone to someday turn yourself into a disease detective.