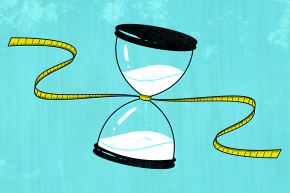 One rhesus monkey lived to 43, the oldest known of his species

Of all possible anti-aging remedies, none has been as intriguing to scientists as calorie restriction, the idea that dramatically reducing food intake can unlock an extended lifespan.

The method works in rodents, which live on average 30 to 40 percent longer when subjected to a calorie restriction diet. But there’s no good way to find out whether it would also make humans live longer, and the data from a pair of studies on primates have been inconclusive. Now a new study suggests rhesus monkeys really do live longer and healthier lives with calorie restriction, offering the best evidence yet that humans could benefit as well.

Calorie restriction doesn’t mean starvation. It means providing all the nutrients necessary for survival, just not a whole lot on top of that. Of course, such a severe diet doesn’t provide much margin for error before malnutrition becomes a serious risk, which is one reason researchers remain skeptical that it could ever work in humans. Throw in the basic fact that any study of human longevity would take several decades to complete — and there’s no ethical or practical way to keep people on a near-starvation diet for that long, especially with no guarantee of a health benefit — and calorie restriction in humans doesn’t seem very promising for now.

But two research teams, one at the University of Wisconsin-Madison and the other at the National Institute of Aging (NIA), have now provided more clarity on how such extreme diets affect rhesus monkeys, the closest relatives to humans ever tested. The teams had previously conducted long-term aging studies on these monkeys and obtained different results, with Wisconsin finding improvements in both lifespan and health and the NIA only reporting improved health.

Working together, the researchers found that key differences in their experiments explained the discrepancy. The NIA monkeys in the control group ate less than Wisconsin’s control group, and the Wisconsin monkeys ate more processed, high-sugar foods than the NIA monkeys. As a result, the researchers conclude that calorie restriction makes more of a difference when food being eaten is low quality. Starting the diet when the monkeys reached adulthood also appeared to have more of an effect on aging than when they were still growing. That’s the opposite of how it works for rodents, which benefited most from lifelong calorie restriction.

At least anecdotally, the Wisconsin experiment does appear to have unlocked some remarkable longevity for these monkeys, which normally only live to about 25 years. Six of the 20 monkeys put on the calorie-restricted diet lived past 40, and one male is now 43, making him the oldest known rhesus monkey. Taken together, there’s enough there for the researchers to suggest that calorie restriction can work in primates, including humans, perhaps most especially as a way to counter the damaging health effects of fat . It’s still a long way from saying calorie restriction is the way to live to 130 years old, but it’s one more reason to maybe think about cutting down on the fatty foods.