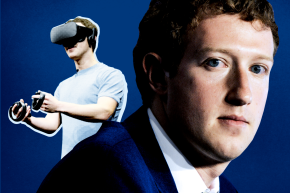 While running a company, helping to raise a child and trying to visit all 50 states on a nationwide ‘tour,’ Facebook CEO Mark Zuckerberg took some time off to spend time in a Texas federal courtroom.

Zuckerberg appeared in court on Tuesday in Dallas to defend Oculus, the virtual reality company bought by Facebook in 2014, over claims that it stole VR technology from software firm ZeniMax Media, owner of game studios id Software and Bethesda Softworks.

ZeniMax, which is suing for $2 billion, claims Oculus built its much-hyped Rift headset based on its early innovations in VR. It said that trade secrets were stolen when former employee John Carmack left to go work for Oculus as chief technical officer.

“It is pretty common when you announce a big deal or do something like that all kinds of people come out of the woodwork and claim that they just own some portion of the deal,” Zuckerberg said in court in response to a question from ZineMax’s lawyers.

“Like most people in the court, I’ve never even heard of ZeniMax before. I know that our legal team would look into this and examine but they aren’t going to take a lot of my time on something they don’t think it’s credible.”

ZeniMax alleges that Oculus infringed on its copyright and that Oculus VR’s founder Palmer Luckey violated a non-disclosure agreement he signed with ZeniMax in 2014. Luckey and former Oculus CEO Brendan Iribe will also be testifying this week.

So far, ZeniMax has tried to prove its case with a video interview in which Carmack shows off a functioning VR headset even before meeting or collaborating with Luckey.

Facebook has called ZeniMax’s story a fantasy, and contends that it’s being sued because ZeniMax passed on a proposed partnership and investment opportunity with Oculus when it was acquired. At the time, Oculus was offering ZeniMax 15 percent of the company to handle all software and content while Oculus took care of hardware.

Carmack admitted to taking thousands of documents and lines of code with him to Oculus when he left ZeniMax, according to court documents. During his testimony, Carmack acknowledged that by the strict intellectual property definition his copying of documents is considered stealing, but he thinks “stealing is an uncharitable way to look” at it since he “didn’t benefit and ZeniMax didn’t lose.”

During Zuckerberg’s questioning, ZeniMax’s lawyer asked if he had fired Carmack, to which Zuckerberg responded, “My understanding is that the claims in this care are false, so it would be wrong to fire him for that.”

The battle between ZeniMax and Oculus has been going on since 2014 when the lawsuit was first filed right after Oculus was acquired by Zuckerberg. However, that lawsuit was just filed against Oculus at the time, but now under Facebook the suit has become a larger deal.