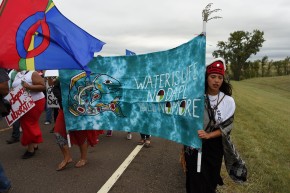 A bill would release drivers from liability if they ran over a pedestrian who was blocking the road.

These people may want to change their protest route in the future. — AFP/Getty Images
By Sara Morrison
Jan 17, 2017 at 1:53 PM ET

A North Dakota bill written in response to the Standing Rock Dakota Access Pipeline protests would allow drivers to run over pedestrians in the road without legal or financial penalties, as long as it was unintentional.

Five state representatives and two senators introduced the bill, which, if passed in its current form, would protect drivers of motor vehicles who hit pedestrians from financial liability and legal ramifications if they hit a pedestrian who was “obstructing vehicular traffic” – even if the pedestrian is killed. The bill also states that pedestrians may not walk in the road at all if there is a sidewalk and must walk as close to the edge of a road as possible if there isn’t one, and yield the right of way to vehicles. The bill does not say if or how right of way rules would change if the pedestrian was in a crosswalk. North Dakota’s current law says drivers must yield to pedestrians in crosswalks if they are on the same half of the road as the vehicle approaching them.

According to the Bismarck Tribune, the bill is in response to the Dakota Access Pipeline Protests, during which protesters occasionally blocked traffic. Rep. Keith Kempenich told the paper that he didn’t like protesters using roads for their protests and “intentionally putting themselves in danger.”

This is not the only bill introduced in response to the protests, as the Associated Press points out. There have also been bills forbidding adults to wear masks and requiring the state to sue the federal government to cover costs incurred by police during protests. All bills so far have been introduced by Republicans, who have a supermajority in the state’s house and senate.