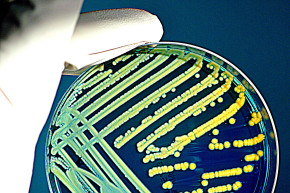 Nevada Woman Dies Of Bacteria Resistant To All Antibiotics

This patient is far from the first to die of antibiotic-resistant bacteria, but it's getting worse

A strain of Klebsiella pneumonia resistant to almost all antibiotics. — Getty Images
By Alexandra Ossola
Jan 17, 2017 at 11:20 AM ET

Antibiotic-resistant bacteria has claimed another victim: a woman in Reno, Nevada, according to a report published Friday from the Centers for Disease Control and Prevention (CDC).

The woman, who was in her 70s, came to the hospital in August because an infection in her hip had led to inflammation in her whole body. She had just returned to the U.S. after a long stay in India; over the preceding two years, she had been receiving treatment there for a broken femur and an infection resulted. Tests showed that the patient was infected with carbapenem-resistant Enterobacteriaceae (CRE), a family of highly-resistant bacteria.

A diagnosis of CRE is bad enough— half the people who get CRE end up dying from it. But the bacteria affecting this patient was particularly resistant, defying treatment to 26 antibiotics. The patient was isolated and special precautions were taken to make sure the virulent bacteria didn’t spread throughout the hospital. No treatment worked; the patient ended up dying of sepsis in September, just a few weeks after she was admitted to the hospital.

This patient is far from the first to die of antibiotic-resistant bacteria, or even from CRE— in 2015, two patients in Los Angeles died from it, leading to news reports that called CRE a “nightmare superbug.” She also won’t be the last. Despite substantial efforts led by the CDC to track CRE and prevent others from becoming infected, these infections are on the rise. People who have compromised immune systems, like the patient in Reno, are the most vulnerable. Short of any new powerful antibiotics that might be able to stop it, the CDC’s efforts are our best hope for preventing further infection.