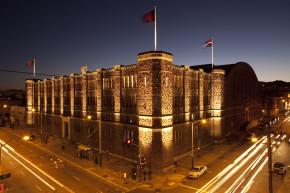 In 2006, Kink purchased the historic building, which formerly housed the National Guard, much to the consternation of some vocal neighbors. But, over the years, the building became a neighborhood fixture, a symbol of San Francisco’s free sexual culture — with a large rainbow flag flying from the roof. Kink even began hosting tours, so that curious locals could explore the elaborate sets built throughout the building — from a dimly lit dungeon to an ornate Edwardian lounge outfitted with all manner of floggers and whips. It also held adult sex ed classes and haunted houses.

The main motivator in stopping production is that the company found there was resistance to booking all-ages events in a building that also housed explicit art and adult film shoots, according to Stabile. Obtaining a liquor license became an issue — San Francisco does not allow venues that sell alcohol to feature full nudity. It was also a liability when the company considered leasing some of its office spaces to outside companies.

So, shooting will soon cease, although Kink will maintain offices in the building. Most of the company’s directors will stay on as full-time employees, although they were also given the option to become contractors, and will be charged with developing their own sets and studios outside of the Armory. Some will stay in San Francisco, while others are planning to decamp to Las Vegas or Southern California, according to Stabile. “It’s very difficult to stay in the Bay Area, given the cost of rent,” he said.

An undeniable part of the shift is the changing economics of the adult business. Kink has moved toward a new business model. Instead of selling memberships to individual sites, such as Hogtied and Device Bondage, it made the decision last summer to offer a single “unlimited” membership to all of its separate sites. That meant Kink could consolidate its departments and produce less content. “There were financial reasons behind it, but also we were producing so much content,” said Stabile. “It could be, in some ways, a hamster wheel.”

All of that factored into the calculus of whether it made more sense to continue filming in the Armory or move toward re-branding the building as a mainstream entertainment venue, said Stabile.

For some, the news is inseparable from all the ways that the tech boom has changed the face of San Francisco, causing rents to soar and evictions to rise. Lorelei Lee, a longtime Kink performer, wrote on Instagram, “The city of San Francisco has slowly lost so many of the queer & sex worker support spaces that saved me, that made me who I am,” she said. “The Armory, with all of its complexities, with its jagged edifice and its haunted history, is one of those spaces. Thank you to all of my coworkers for sharing this magical, banal, strange, exhausting, inspiring, beautiful time and place with me.”

Maitresse Madeline, a longtime Kink director, told Vocativ in an email about what it meant for her, as “a young girl from the midwest,” to get her job as a dominatrix at the company. “There was literally nothing, I mean nothing, that wasn’t at my finger tips. It allowed me to let my imagination go as wild and to the darkest depths of my desires,” she said. “Anything I ever wanted was built for me, by hand, from the most skilled craftsmen in California. It is impossible to put into words what this place has meant to me and how it has shaped my life. It’s a bubble within a bubble.” She says that “without the incredible people, the humans that inhabit that space, you have a shell of what was once something spectacular,” but she also argues that “change is good.”

As much as Stabile emphasizes that production will continue much as it has, just outside of Kink’s headquarters, he also added, “It’s the end of an era, certainly. The Armory has loomed large in the imagination of San Francisco and the cultural imagination of sex around the world.”