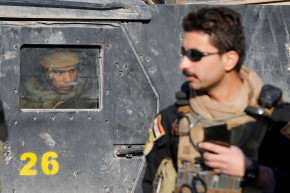 Iraqi Forces Claim They Have Momentum In Mosul Fight

Mosul University is reportedly back in sovereign hands, although badly damaged

Iraqi forces say they've taken over half of the northern city back from ISIS — REUTERS
By Gilad Shiloach
Jan 16, 2017 at 9:30 AM ET

Three months of intermittent progress and casualties suffered in the campaign to take the city of Mosul back from the Islamic State has finally begun to show some results. Iraqi forces, along with Kurdish peshmerga, Shiite militias and U.S. and other foreign air support have reportedly managed to capture most of the eastern half of the city.

The Iraqi army declared that it has completely liberated Mosul University, where ISIS had set up headquarters, and that Iraqi troops had found chemical weapons and other explosives in the compound. Brett McGurk, the U.S Special Presidential Envoy for Global Coalition to Counter ISIS, tweeted that the university was once among the largest research centers in the region. Images from the compound however show the university’s main library damaged by fire. It is not yet clear who torched the building, said to have held one of the largest collections of books in the country.

Iraqi state television reported that the Iraqi army is close to capturing a five-star hotel in Mosul, infamous for appearing regularly in ISIS propaganda to serve as a sweetener for people considering traveling to live in under ISIS rule after it had captured Mosul in 2014.

Over the weekend Iraqi media broadcast video in a report that featured Russian passports said to have belonged to ISIS fighters in Mosul. Some of them appeared to have been issued in Chechnya, a predominantly Muslim region in Russia from which many militants had traveled to Iraq and Syria to fight for the Islamic State.

In the meantime the Amaq News Agency which publishes material in support of ISIS posted a video said to show Mosul residents lining up to register to fight for ISIS. “We found many brothers who are willing to join ISIS, among them suicide attacks and brothers who want to go to the frontline,” said one man in the video. Its contents couldn’t be independently verified. The final scenes included groups of men pledging allegiance to ISIS and its leader Abu Bakr al-Baghdadi.