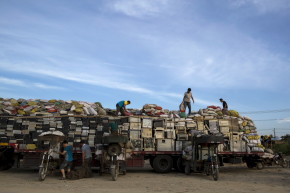 UN: E-Waste In Asia Skyrockets Every Year
By Shira Rubin

Alarming rates of electronic and electrical waste pose severe environmental and health concerns across Asia, according to a new report issued Sunday by the United Nations University, the organization’s research branch.

The study found that the improper disposal of smartphones, computers, air conditioners and other household items has surged by 63 percent in Asia over five years, alongside rapid industrialization, increased disposable incomes, and the emergence of quick and cheap production of gadgets that are not easily recyclable or reparable.

“Across all countries in the region, there is an overall trend in rising e-waste quantities that is outpacing population growth. This indicates an increasing number of products being disposed of, with the fastest growth in newly-industrializing countries,” the report said. “The largest contributor is unsurprisingly China, given its large and increasingly affluent population that demands the latest gadgets and appliances.”

In 2014, Asia generated 16 million tons of e-waste, or 8 pounds (3.7 kg) of electronic waste per inhabitant. China’s lead, however, is still comparatively less than the measure of e-waste — 34 pounds (15.6 kg) — per inhabitant reported in Europe.

Up against insufficient infrastructure, lax environmental regulations, and rampant consumer activity, Asia’s efforts to process discarded electronics are made all the more Sisyphean as the continent continues to serve as a dumping ground for richer, western countries.

Experts estimate that some 80 percent of America’s electronic waste is shipped to Asia or Africa.

The report shows that there has been an almost 63% rise in e-waste production in Asia, with China leading the continent's waste.

In the Chinese city of Guiyu, in the southern Guangdong province, tens of thousands of illegal workers earn their living by disassembling electronics so that their metal parts can be resold. Without proper equipment and burning the materials rather than recycling them, however, the workers, including children, are exposed to toxins known to cause cancer, infertility, and a host of other health problems.

According to a United Nations initiative known as StEP (Solving the E-Waste Problem), electronic waste can contain up to 60 chemical elements — including lead, mercury, and arsenic, beryllium, cadmium and polyvinyl chloride — as well as flame retardants and other potentially hazardous chemicals.

Government programs to clean up the city have only concentrated the activities into an industrial park, and heavy metal contamination has turned the air and water toxic, according to a 2014 study by researchers at Shantou University Medical College. Children in the town also had high lead levels in their blood, the university study found.

The study found that the region’s worst e-waste culprit per capita was Hong Kong, where each individual generated an average of 47.8 pounds (21.7 kg) of e-waste in 2015. Singapore and Taiwan also led in e-waste dumping, with just over 42 pounds (19 kg) per person generated in 2015, according to the study.

E-waste per capita in Asian countries.

The United States is the only developed country to not have ratified the 1989 Basel Convention, an international treaty forbidding the deposits of toxic wastes imported from wealthy countries to developing ones. It has also joined Canada and Japan in refusing to accept the Basel Convention’s 1995 amendment that directly forbids such transfers.

According to a United Nations Environment Program report titled “Waste Crimes,” up to 50 million tons of electronic waste—mainly computers and smartphones—are expected to be dumped in 2017.