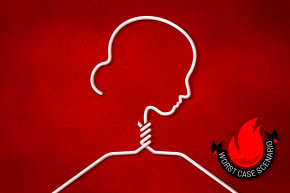 These are the horrifying hallmarks of the days before the U.S. Supreme Court’s 1973 decision in Roe v. Wade upheld a woman’s right to abortion. Before that landmark moment, women wanting to terminate a pregnancy had to visit back alley doctors, collect funds to travel to a state where the procedure was legal, or attempt it themselves. The results were often devastating, as made so visceral by the now infamous symbol of this time: the coat hanger.

For younger generations, these stories are a horrifying relic of the past — a tragic historical era to revisit by marking the anniversary of Roe v. Wade. This Sunday, on January 22, it will be 44 years since the decision.

But as president-elect Donald Trump is sworn into office on Friday, it’s a reality that suddenly feels more relevant. Trump has promised to appoint “pro-life” judges to the Supreme Court and has acknowledged the possibility that Roe would be be overturned as a result. His vice president, Mike Pence, said in September, months before the election: “I want to live to see the day that we put the sanctity of life back at the center of American law, and we send Roe v. Wade to the ash heap of history, where it belongs.”

What exactly would it mean if Roe does turn to ash? Do we return to the horrors of those pre-1973 days? The best way to get a full picture of this potential future is to talk to reproductive rights activists and researchers. They know what the “bad old days” were like and have seen the restrictions that many states have tried to put in place since, coming as close as they can legally get to making abortion difficult for most women. The picture they paint is dark and terrifying, yes, but, perhaps in some small ways, less stark than you might imagine.

On the eve of the inauguration, reproductive rights activists were concerned about Roe v. Wade’s future, though many believed it’s likely safe for the next few years. Several things would need to take place for it to be overturned.

First, Trump would have to replace the late Justice Antonin Scalia’s Supreme Court seat with a conservative “pro-life” judge, as he has promised he will. Still, the court has five judges — out of nine, pending Trump’s first Supreme Court pick — who are expected to rule to uphold Roe. But if any of those judges retires or dies, as is possible in the next few years, another Trump appointment could shift the balance in the court. It would then take a Roe-challenging case to reach the Supreme Court, perhaps a state legislature or Congress passing a strict anti-abortion law. That process can take awhile, too.

Even should all of those steps happen, many experts are skeptical of whether the court would break with decades of historical precedent and vote against Roe. But, it’s more possible than ever before — and if, in the worst-case scenario that it does happen, the issue of abortion would, as Trump himself has said, “go back to the states.” The question for the average American is what that means, exactly.

“The states get to create their own abortion laws,” said Elizabeth Nash, Senior State Issues Manager.at the Guttmacher Institute, of this post-Roe scenario. “It might sound funny, because we already have that to some extent.” As she points out, abortion access looks very different in California and New York than in Oklahoma and Arkansas. But if Roe is overturned, the states have more power to do as they please.

It’s possible to get a rough sense for how the chips would fall. In 2007, the Center for Reproductive Rights released a report looking at the likely state-by-state outcome if Roe was overturned. They found that in 30 states, women would be “at risk of losing their right to abortion.” In 20 states, abortion access appears secure, thanks to state constitutional or statutory protections.

In the case of either stringent restrictions or an outright ban in a particular state, it would likely mean that a women would have to travel to another state to obtain an abortion. “Depending on where you live in the country that travel could be very far — it wouldn’t just necessarily be to a neighboring state — it could be to a completely different part of the state,” said Julie Rikelman, litigation director at the Center for Reproductive Rights. “Some women just won’t be able to make that trip.”

These travel requirements would be “particularly harmful to low income women and people of color,” said Kelly Blanchard, president of Ibis Reproductive Health, “because they don’t as easily have the resources to either get around those restrictions or travel to other venues.”

As Nash points out, this is something we’ve already seen in states like Texas. Thanks to prohibitive abortion restrictions that have caused more than half of the state’s abortion clinics to shutdown, women have been forced to travel great distances — sometimes several hours and hundreds of miles — to terminate their pregnancies. In addition to travel costs, women have the added challenge of finding childcare and time off work.

Some women would inevitably still seek an illegal abortion in their home state, regardless of restrictions or a ban. “I am very concerned that … we return to an underground railroad, essentially,” said Nash, referring to the informal pre-Roe networks where women would be referred by doctors, friends, or word-of-mouth to so-called “back-alley” abortion providers.

But that is to say nothing of the possibility of finding a safe, trustworthy provider. “The issue here is: Can they access services that are safe?”

We already know that abortion bans do not make the procedure less common. Bans are, however, associated with greater complication rates for abortion. Prior to Roe, 1.2 million American women had illegal abortions each year, and these procedures resulted in as many as 5,000 deaths annually, according to NARAL.

Still, Nash suspects women today would be better off than they were pre-1973. One big reason is the existence of misoprostol, the so-called “abortion pill,” which might be easier to access than surgical abortion in the case of bans or restriction.

A model for this is the organization Women on Waves, which covertly sends abortion pills to women in countries where pregnancy termination is restricted or banned. It’s unclear how abortion bans would address medication, but already most states have placed burdensome restrictions on how these drugs can be prescribed.

“The problem is that people take advantage of women who are in desperate circumstances,” said Rikelman. In an unregulated or illegal market, she said, some women would obtain drugs that only masquerade as an abortifacient, and these could be dangerous or simply ineffective.

Already, a small percentage of women across the country attempt to self-induce abortion. A 2008 national study found less than 2 percent of women visiting an abortion clinic had attempted to end the pregnancies themselves beforehand. A Texas survey found that 7 percent of women seeking an abortion attempted to self-induce with at-home remedies, like herbs and vitamins, and medications obtained in Mexico without a prescription. None of the women surveyed were successful in their attempts.

Some women consider desperate measures, though the rates of this are unclear. “There are stories of women trying much more drastic things to end a pregnancy, including being punched in the stomach, having somebody push them down the stairs,” said Rikelman. In 2015, there were more than 700,000 Google searchers for information about self-induction, including over 1,000 for the phrase “how to do a coat hanger abortion” and hundreds for “bleaching one’s uterus and punching one’s stomach,” according to the New York Times. Recently, a Tennessee woman was arrested for allegedly attempting to abort her 24-week pregnancy with a coat hander.

The negative consequences of being denied legal abortion are not limited to a woman’s physical health, of course. Because of recent laws restricting abortion access, researchers now know that there is an emotional impact from being denied the procedure. In a blockbuster study late last year, researchers found that denying women abortion was associated with poor mental health outcomes. Women who were turned away because they were just past the clinic’s gestational age limit experienced more anxiety, lower self-esteem, and lesser life satisfaction.

There are, however, some glimmers of hope — even if Roe is overturned, and even if states pass abortion restrictions and bans.

“You could see challenges in some state constitutions, instead of the federal constitutions,” she said. She points to Oklahoma, which has passed several anti-abortion laws that have later been struck down in the state Supreme Court. There’s also a hope among some activists that some anti-abortion talk is really bluster. As she puts it, “states might not adopt all of the restrictions once they have this authority, because then it’s much more real — there isn’t a Supreme Court that can strike down these laws. It’s really about them enacting laws, and they have to really take responsibility for it.”

Nash says any possible Roe repeal undoubtedly means that some states will ban abortion — but she says the landscape might not be quite as bad as some think.

“I understand the fear,” she said. “The issue is: Will this unfold to fulfill this fear? We don’t know what will happen— and it will take a long time.”

What’s the worst that can happen? This week, Vocativ explores the power of negative thinking with our look at worst case scenarios in politics, privacy, reproductive rights, antibiotics, climate change, hacking, and more. Read more here:

The Worst Has Happened. Where Do We Go From Here?