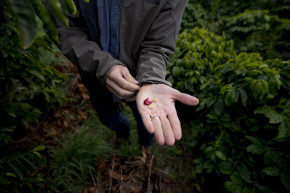 Scientists Crack The Genome Behind Every Starbucks Coffee
By Alasdair Wilkins

Scientists Crack The Genome Behind Every Starbucks Coffee

If you’ve ever had a coffee fancier than instant, then it’s from the plant Coffea arabica. First grown in the Ethiopian highlands, the arabica plant is used to make 70 percent of the world’s coffee, including every cup brewed at Starbucks. Now scientists have sequenced the plant’s genome and made the data publicly available, unlocking the secrets behind some of the world’s favorite beverages. Considering this crop could be particularly vulnerable to climate change, that knowledge may have come not a moment too soon.

Almost all of the world’s coffee comes from either the arabica plant or Coffea robusta. As the latter’s scientific name implies, it’s the hardier of the two crops, able to grow in a far wider range of temperatures and climates than arabica. But robusta is also more bitter and more highly caffeinated, which is why it’s rarely used outside of blends and instant coffee. That means arabica’s relative fragility — it ideally needs to be grown in temperatures consistently between 60 and 75 degrees Fahrenheit — could put the entire coffee industry at risk, with the millions of small farmers at particular risk.

With funding from the Japanese beverage company Suntory, researchers at the University of California, Davis, were able to sequence the genome for the arabica plant. Its genome has about 1.19 billion genetic base pairs, about a third of the number in the human genome. But that didn’t make the task simpler: Because arabica is a hybrid species produced by crossing two different coffee plants, it actually has four sets of chromosomes, rather than the two sets that humans and the vast majority of other species have. The researchers say their next focus will be identifying particular genes that will improve the quality of future coffee crops.

Finding ways to improve the resiliency of arabica is especially important, as the current crop depends on steady conditions to thrive. Climate change works against that not just by making average temperatures hotter, forcing highland farmers to move to greater elevations, but also by making extremes more common. Droughts and heavy rains are simultaneously on the rise in coffee-growing regions, with the former reducing the size and quality of coffee crops while the latter makes more likely outbreaks of a destructive fungus known as coffee rust. Arabica may well have to do some serious adapting in order to survive these rapidly changing conditions, and scientists have an opportunity to help that along by using knowledge of the genome to produce tougher, more disease-resilient strains.