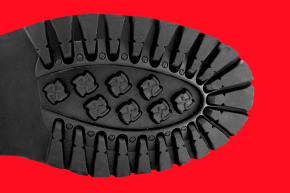 A shoe company has recalled one of its boots after a customer pointed out that they leave swastika imprints on the ground.

The U.S. based company, Conal International Trading, Inc., recalled the shoes and issued an apology after a Reddit user on Monday posted an image of the imprint online, adding, “There was an angle I didn’t get to see when ordering my new work boots.”

“The design was not intentional and was a mistake made by our manufacturers in China,” the company said in a statement on its website. “There was never any intention to include any offensive designs on the products we import. We will be investigating the issue.”

White supremacist website Daily Stormer praised the boots on Tuesday in an post titled, “Must have: Polar Fox Boots — Perfect Footwear for Nazis!” and others on Reddit made Nazi jokes about the boots, rating them “nein out of 10” and saying they’re “heily recommended.”

“The swastika serves as the most significant symbol of white supremacy and anti-Semitism, and whether intentional or not, the use of the symbol on the boot is deeply offensive,” The Anti-Defamation League, an international organization committed to combating anti-Semitism, said in a statement on Thursday.

“As soon as we learned about the boots leaving swastika-like imprints on the ground, ADL reached out to the merchandiser to alert them to the issue and urged them to recall the product,” said Deborah M. Lauter, Senior VP of Policy and Programs at the ADL, in an email to Vocativ. “They were mortified, and had already taken action to ensure the boots were no longer available for sale.”

Conal is not the only shoemaker to be criticized for amassing support from card-carrying racists and anti-Semites. New Balance came under fire in November after the same white-supremacist website called it the “official shoes of white people,” based on a statement the company’s VP of Public Affairs Matt LeBretton made that “things are going to move in the right direction” under a Trump presidency. The company released a statement saying it “does not tolerate bigotry or hate in any form.”

There’s also a longstanding rumor, which dates back to at least 1998, according to Snopes, that claims that Vans Shoes leaves Star of David marks so that wearers “stomp on Jews.” Snopes debunked this rumor in 2015 and determined that “the six-sided motif was placed there in all innocence.”

In 2006, the ADL also deemed this rumor baseless. “There is no factual basis to believe that the maker of Vans shoes incorporated the six-pointed star design in an attempt to insult Jews,” they had said in a statement, “Over the years the company has sought to reassure inquirers that the trademarked pattern is just that — a pattern — with no intended anti-Jewish message.”