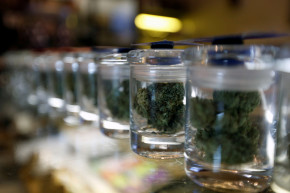 Rejoice! Marijuana Is Effective As Medicine
By Ethan Harfenist

Rejoice! Marijuana Is Effective As Medicine

The National Academies of Sciences, Engineering and Medicine on Thursday released a report that states, conclusively, that marijuana has medicinal value. As a result, drug policy lobbyists have called on the federal government to stop impeding on cannabis research in order to fully discover the plant’s many medical benefits.

The committee that conducted the study reviewed research published since 1999 and considered more than 10,000 scientific abstracts. Along with reaching nearly 100 conclusions about medicinal marijuana, the committee also proposed how to bolster cannabis research, address roadblocks and improve data collection.

“For years the landscape of marijuana use has been rapidly shifting as more and more states are legalizing cannabis for the treatment of medical conditions and recreational use,” said Marie McCormick, chair of the committee, in a statement. “This growing acceptance, accessibility, and use of cannabis and its derivatives have raised important public health concerns…As laws and policies continue to change, research must also.”

Although the report did not find clinical evidence for every condition medical marijuana treatment is currently used for, it states that for many conditions, including “chronic pain in adults…chemotherapy-induced nausea and vomiting, and multiple sclerosis spasticity symptoms,” marijuana is an effective treatment. Further, the committee found that smoking marijuana “does not increase the risk for cancers often associated with tobacco use – such as lung and head and neck cancers.”

Twenty-eight states have medical marijuana laws on the books, but last summer, the DEA announced that it would not reschedule marijuana. The report notes that “specific regulatory barriers, including the classification of cannabis as a Schedule I substance, impede the advancement of research.”

As such, the report’s findings have inspired lobbyists to call out the government.

“This report is vindication for all the many researchers, patients and healthcare providers who have long understood the benefits of medical marijuana,” Michael Collins, Deputy Director of National Affairs at the Drug Policy Alliance, said in a statement issued on Thursday. “To have such a thorough review of the evidence conclude that there are benefits to medical marijuana should boost the case for federal reform. It also underlines how out of touch the DEA and other marijuana reform opponents are when they claim otherwise.”