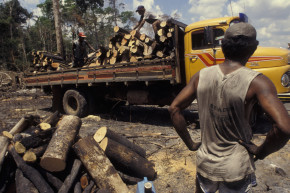 If we lost 7% of wild areas within 15 years or less, think of where we'll be when our grandchildren grow old

There are still parts of this planet that lie far beyond the watchful eyes of humanity, but such unbroken wilderness is getting harder and harder to find. A new study has found that the world’s undisturbed ecosystems are being increasingly, well, disturbed, as human activity like logging and farming has shrunk the world’s wilderness seven percent since 2000.

And there’s good reason to care about that distinction, as tropical wilderness areas like the Amazon rainforest do far more than their fair share in absorbing excess carbon and thus reducing some of the effects of global climate change. The researchers estimated that wilderness areas account for about 40 percent of the total carbon storage in the tropics, despite being just 20 percent of the total area. The disparity isn’t quite as pronounced in northern regions, but intact forests play a major role in keeping permafrost from melting, which can otherwise release centuries- or even millennia-old carbon into the atmosphere.

The tropical rainforests of South America and Southeast Asia and the temperate forests of North America and Eurasia have suffered the most severe losses. All were more than, and in some cases were more than double the global average of seven percent. Because of these countries’ size, Russia, Brazil, and Canada account for more than half of the total loss, though other countries have seen still more dramatic losses in terms of the percentage of overall wilderness. Romania, for instance, lost all its wilderness regions greater than 500 square kilometers since 2000. Paraguay is the only other country that comes close, having lost about 80 percent of its wilderness. That two countries 7,000 miles away would be the most dramatically affected only underscores the global nature of the problem.

The researchers attribute the wilderness loss to several different factors. Mining and energy productions were major drivers in Russia and Australia. Logging was a primary reason for wilderness loss in Africa and Southeast Asia, while farming was another significant cause in South America. Again, that there are such diverse reasons means there’s no single, catch-all solution to conserve the planet’s wilderness. But given their role in storing carbon and providing refuge for animal and plant species that would otherwise be threatened by humanity, undisturbed ecosystems represent some of the planet’s most precious resources — and perhaps those hardest to restore once lost.