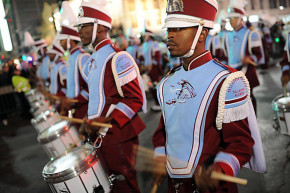 The Talladega College Marching Tornadoes band has turned to crowdfunding to finance its trip to Washington D.C. to perform at Donald Trump’s inauguration. The band has raised just over $56,000 in nine days, and has three days left to reach its goal of $75,000.

The marching band of Talladega College, a historically black college in Alabama founded by former slaves, was among 40 organizations that agreed to participate in the inaugural parade on January 20, a move that prompted major backlash online and on campus. The announcement sparked a schism within the school, and two petitions — one in favor of performing and one against — were lodged. Those against participating said that marching in the inaugural parade would be tantamount to supporting President-elect Trump, whose campaign attracted members of the alt-right, white nationalists, and former KKK members. Those in favor wanted to witness the transfer of power.

Eventually, College President Billy C. Hawkins stated that the band would perform. “As many of those who chose to participate in the parade have said, we feel the inauguration of a new president is not a political event but a civil ceremony celebrating the transfer of power,” he said in a statement last week. Despite the decision, the band has had to turn to the internet to secure funds.

With three days left in its GoFundMe campaign, the band has a little less than $20,000 to raise. The money will be used for “transportation, travel, lodging, and other expenses,” according to the campaign page. Herman Cain, a candidate for the 2012 Republican Party presidential nomination, aired his support on Facebook.

“Commendations to Talladega College and President Hawkins for separating politics from ceremony, and for not allowing illogical and irrational attitudes to stop a group of young people from a learning experience,” Cain wrote on his website. “I have contributed to their GoFundMe page. I hope you’ll join me and do the same. They deserve our support.”