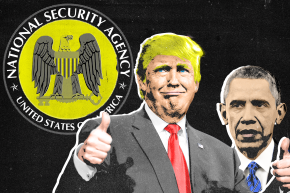 The agency can now send its unfiltered surveillance to the FBI, DEA and more

With just over a week left until Inauguration Day, the Obama administration has alarmed privacy advocates by significantly weakening rules that prevent the troves of raw data collected about American citizens by the National Security Agency’s dragnet surveillance programs from being shared with other U.S. agencies.

The changes will allow the incoming Trump administration to more easily use the spy agency’s unfiltered foreign intelligence data against American citizens, encouraging intelligence analysts to send anything thought to be evidence of a domestic crime to the FBI, Drug Enforcement Agency, and others.

The rule change, made earlier in January by the Office of the Director of National Intelligence (ODNI), applies to foreign surveillance performed by the NSA under Executive Order 12333, a decades-old intelligence-gathering mandate that was greatly expanded after 9/11. While the surveillance program is ostensibly aimed at non-U.S. citizens abroad, the warrantless dragnet is so vast that it “incidentally” collects information about Americans.

Normally, that information is subject to “minimization” requirements, which instruct NSA analysts to either destroy, redact, or otherwise anonymize data about American citizens before sharing it with other agencies. But under the new procedures, the NSA will be permitted to share raw, unfiltered data with other agencies – including the intelligence divisions of domestic law enforcement agencies such as the FBI and DEA.

In other words, if an NSA analyst happens to stumble across evidence of a drug crime, there’s now a better chance it will end up in the DEA’s tip box.

The new rules specifically contain an exception instructing the NSA to share surveillance data with law enforcement if “the information is evidence of a possible commission of a crime,” so long as the receiving agency applies its own “minimization” standards to the data received. While domestic law enforcement agencies aren’t technically permitted to use classified intelligence as evidence in court, the DEA and other agencies are known to use methods to obscure the true source of surveillance data – a dubious practice known in the law enforcement world as “parallel construction.”

Privacy advocates say the changes represent a significant expansion of power – one that’s especially alarming given the incoming Trump administration’s open hostility to immigrants, minorities, and members of the press.

“This raises serious concerns that agencies that have responsibilities such as prosecuting domestic crimes, regulating our financial policy, and enforcing our immigration laws will now have access to a wealth of personal information that could be misused,” said Neema Singh Guliani, a legislative counsel for the American Civil Liberties Union, in a statement. “Congress needs to take action to regulate and provide oversight over these activities.”