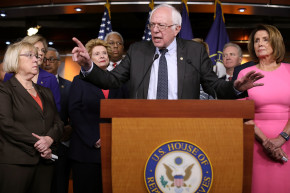 Sanders Fans Furious With Dems Who Voted Against His Amendment

On Wednesday night, amid Senate votes for a bill that brought us one step closer to repealing the Affordable Care Act, a bipartisan group voted against an amendment to that bill proposed by Bernie Sanders and Amy Klobuchar that could have paved the way for cheaper drugs to be imported from Canada. While a surprising number of Republicans (12) voted for the amendment, 13 Democrats voted against it. The amendment was rejected by a 46-52 vote.

Sanders supporters, among others, are very upset with the Democrats who did not vote Sanders’ way — especially Cory Booker, who some hoped will be their future president. In subreddits devoted to Sanders and progressive causes, there are multiple threads castigating the Democrats who voted against the amendment, especially as, with the number of Republicans who voted for it, they believe it would have passed. (This is not true; amendments to bills need 60 votes. Even with all Democrats voting for it, it still would only have received 59 unless Dianne Feinstein dragged herself out of post-pacemaker-surgery bed rest to vote for it.)

A popular thread on the Political Revolution subreddit is calling for the 13 Democrats to be primaried, singling out for special mention “that weasel Cory Booker” and his “treachery.” This message was also posted on the Sanders for President subreddit. Both subreddits include several other threads about the vote, framing it as Democrats bowing to pressure from pharmaceutical companies who want to continue a monopoly on that allows them to charge Americans much more for the same drug that other countries, including Canada, do. With competition from Canada, American companies would be forced to lower their prices to compete.

So, why would Democrats vote against an amendment that could lower drug prices? Are they in the pocket of Big Pharma, as some suggest?

A Senate staffer familiar with the amendment told Vocativ that some Democrats who voted against it were concerned over potential health liabilities the amendment presented.

“It did not include certification or safety standards for the drugs themselves,” said the staffer, who spoke to Vocativ on the condition of anonymity.

That’s pretty much in line with Booker’s statement defending his decision.

“I support the importation of prescription drugs as a key part of a strategy to help control the skyrocketing cost of medications,” Booker said in a statement to Vocativ. “Any plan to allow the importation of prescription medications should also include consumer protections that ensure foreign drugs meet American safety standards. I opposed an amendment put forward last night that didn’t meet this test.”

Booker also noted that he voted for amendments that would lower drug prices and protect drug benefits for people on Medicare. Those amendments were rejected by every single voting Republican.

Booker’s office did not respond to questions about why he was being singled out for special scorn over the vote. Thirty-nine Republicans also voted against the amendment.