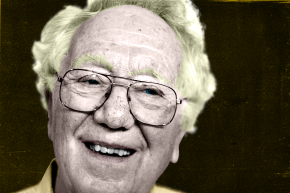 In one of his last interviews in 2015, captured on video, Oliver Smithies talks about a lifetime of discovery and how he came up with out-of-the box ideas

Oliver Smithies, a biochemist whose genetic research earned him the 2007 Nobel prize, died Tuesday at 91. Smithies’ work made it possible to selectively switch off genes in mice, giving researchers a powerful tool to study how genes worked at a time when their specific functions were largely still a mystery to science. His method eventually made possible well over 100,000 experiments in the past 30 years, a worthy legacy for a man whose career was defined by a deep love for the daily process of doing science.

Smithies — who shared the Nobel with fellow laureates Mario Capecchi and Martin Evans — won the award not because he answered a question, but because he gave scientists the opportunity to ask so many new ones. Above all, Smithies’ passion was being in his lab, asking questions and experimenting, and his career-defining contribution let countless colleagues join him in doing exactly that. Since he and his colleagues first devised their method, called gene targeting, in 1987, it has opened new avenues of research into cancer, heart disease, diabetes, and substance abuse, among many others. Not that Smithies took this or any other achievement as an excuse to take it easy — he kept working into his 90s, to say nothing of getting his pilot’s license in his mid-50s.

In the spring of 2015, Smithies sat down with this reporter for one of his last interviews. Then just months from his 90th birthday, he was still working in his lab at the University of North Carolina at Chapel Hill, having turned his focus to the genetics of high blood pressure and conditions like sickle-cell disease. The interview, originally made for UNC’s student newscast “Carolina Week,” interrupted his still busy schedule, but he said he took the time for much the same reason he gave his Nobel lecture: It was a chance to connect and communicate with students, to pass along some portion of the insights and passion that had guided his own research to the scientists of tomorrow. That his philosophy of life and science also had plenty to offer the rest of us was a happy byproduct.

Smithies was in his lab throughout the week, but it was on Saturdays that he did some of his most important work. He placed great value on what he called Saturday morning experiments, a time when he relaxed the usual rules and procedures for his experiments and let his intuition guide him. Those freewheeling experiments let him explore ideas that he might otherwise have been too cautious to approach. He assiduously recorded his 70-year career in more than 150 handwritten notebooks, and he noted in his Nobel lecture that the entries for his most critical discoveries were often Saturdays.

When accepting his Nobel, Smithies became probably the only laureate in the prize’s history to thank his flight instructor. He had learned to fly while taking a sabbatical at 52, an age far older than that of the typical novice pilot. He admitted later that, like most first-time fliers, the fear of making a possibly fatal error often left him drenched with sweat, making it a point of pride when he at last managed to remain completely dry — as he observed later, flying taught him it was possible to overcome fear by learning. And then almost anything was possible: In 1980, Smithies was his former instructor’s co-pilot on a single-engine flight across the Atlantic, setting a speed record that stood for two decades.

To say Smithies kept working right up to his death isn’t entirely accurate, because he never thought of his time in the lab as work. As he observed in 2015, he was doing what he loved. “Most of your working life will be spent working,” he said. “And that should be enjoyable. Quit science and go play the guitar if you don’t like science!” For his part, Smithies never had to consider such a career change. He was always where he wanted to be, even as his career took him all over the world — he spent decades at UNC and before that at the University of Wisconsin-Madison, but he never lost the Yorkshire accent of his youth in northern England. As long as he was in his lab, Smithies was home.