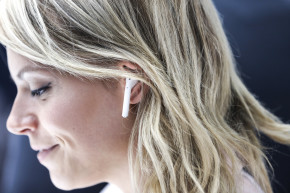 Apple’s wireless headphones might have been the butt of every joke last year, but the AirPods have lead the company to corner 41 percent of the market in just one month.

Slice Intelligence, a market analysis firm, released a report showing that based on revenue Apple is now dominating the wireless headphone market with its new AirPods and its subsidiary Beats Audio, which also sells wireless headphones such as the popular Beats by Dre.

The report suggests that Apple now has one-fourth of the market with the AirPods, which is similar to the percentage it owns in the smartphone market with the iPhone. Before the release of the AirPods, Beats was in the lead with 24 percent and Bose after with 10 percent. Now, AirPods lead with 26 percent, Bose went up to 16 percent, and Beats dropped down to 15 percent. Apple might be cannibalizing its own market share, but it still puts the company on top.

AirPods were first announced in September along with the iPhone 7, the newest model device which has no audio jack for traditional wired headphones, and they were finally released on December 13 after two weeks of production delays. Apple Stores quickly ran out of $159 headphones last month, and they are now in high demand. The next shipment date is March, according to the website.

The AirPods look just like regular Apple earphones but without the wire. The earbuds can sync wirelessly to any Apple device and easily switch between audio channels. They also have technology that stops playing audio when the user removes the earbud, and supposedly, they are designed to hardly fall out of the users’ ears.

When the AirPods were released many people were skeptical, making jokes online saying they were poorly designed and that they’d get lost immediately given the small size. However, Vocativ tried looking for reports on Twitter, Facebook and Reddit of the earbuds getting lost, but they were few. Either people aren’t losing them immediately as much as they thought they would or they’re still waiting for their pair to ship. Apple claims the AirPods aren’t likely to get lost, so much that it removed an app designed to help locate lost buds from the App Store.