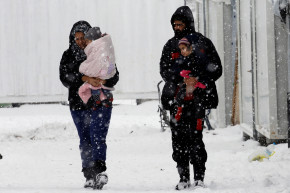 Refugees Are Dying In Greece’s Rare Snowfall
By Shira Rubin

A rare cold snap across Europe has caused the deaths of at least four refugees and endangered the lives of tens of thousands of others stranded in the flimsy tents of Greece’s refugee camps, reviving a discussion around the continent’s tepid response to the humanitarian crisis.

“The cynical neglect of European States’ policies, compounded by icy temperatures and a lack of preparation for winter have worsened an already unbearable situation for thousands of men, women and children seeking protection in Europe,” said Clement Perrin, Doctors Without Borders mission leader in Greece. “Greek authorities must stop congratulating themselves on humanitarian achievements while thousands of people are left to suffer as they wait for their asylum claims to be processed. No person seeking protection, fleeing war, torture and extreme violence should be left out in the cold.”

As charities on the ground scramble to provide blankets and heaters to refugees in need, neither Greek nor European bureaucracies are willing to assume responsibility for the emergency.

“The situation is untenable,” said European commission spokesperson Natasha Bertaud. “But we also have to be clear…that ensuring adequate reception conditions in Greece is a responsibility of Greek authorities.”

Greek migration minister Yiannis Mouzalas said earlier this week that he was trying to temporarily transfer refugees to hospitals, but that delays were expected, since “there are legal and civil protection issues that have first to be addressed.”

In Greece, unprecedented sub-zero temperatures and heavy snowfalls throughout the country have severely endangered the thousands of people living in unheated and overcrowded tents. Local authorities report that 15,000 people are living on the Greek islands in facilities intended for around 6,000.

Footage shared on Facebook show refugee camp tents close to the ground and filled with snow.

A stranded refugee boy at a refugee camp north of Athens

On Wednesday, a Greek navy vessel provided emergency shelter for 500 refugees and migrants from the Moria refugee camp on the Greek island of Lesbos, where temperatures this week plummeted to -23 degrees Fahrenheit.

Thousands have lived in improvised dwellings at Lesbos’ Moria Refugee Camp since members of Greece’s neo-fascist Golden Dawn party set fire to the facility in September.

And this is #Elliniko in #Athens where ~400 people are settled. Winter is not the problem. Living in tents like these is. pic.twitter.com/dPho2wWduN

In March, Greece supported an agreement between the European Union deal and Turkey that aimed to halt the inflow of refugees into the Greek islands. The move left tens of thousands in limbo as they await the processing of asylum claims, or as border closures have prevented their journey onward.

A banner reading: "Home is where your mom is" is attached to a tree at a refugee camp in Greece