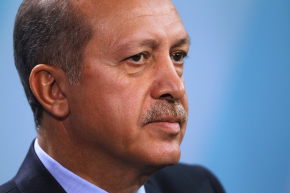 And a giant brawl between dozens of politicians. They livestreamed that, too

Turkish media blackouts have extended to a series of violent skirmishes within Parliament as it debates whether to give sweeping executive powers to their president, Recep Tayyip Erdogan. But legislators got around that: by broadcasting the events through their smartphones and tablets.

The proposal is drastic. It changes Turkey’s system of government from a parliamentary system to a presidential one, expands the president’s control over the judiciary, and limits scrutiny over the administration. The rules are controversial, and largely unknown to the Turkish public: According to a recent poll, 64 percent of the voters have no to little information about them. Erdogan has said they will speed Turkey’s progress, though the proposal had taken no input from civil society suggestions and constitutional law experts have harshly criticized them.

Violence surrounding the proposals started alongside the parliamentary debates on Monday, when riot police dispersed protesters outside with water cannons and teargas. Ankara Governor Ercan Topaca responded by banning all protests for a month in Turkey’s capital, citing a “threat of terrorism” and invoking the state of emergency powers declared after last summer’s coup attempt.

On Wednesday, the violence moved into the Parliament. What began as fist fights earlier in the day turned into a huge brawl when opposition parties protested voting on new changes after midnight, as caught on multiple cameras, many of them filmed by female deputies from multiple parties who stood at a distance.

Much of the talks didn’t appear on mainstream news, thanks to an effective blackout over the constitutional talks. Pro-government newspapers and television channels haven’t broadcasted opposition’s criticism against the proposal.

A deputy from the opposition Republican People’s Party (CHP), Ali Seker, brought professional camera equipment to the assembly hall and started broadcasting via Periscope. His recorded broadcasts from the first three days of Parliament sessions, which unlike official Parliament TV’s official stream ran uninterrupted and uncensored

As of this writing, the first seven out of 18 articles that amend the Turkish constitution have been voted in favor by the ruling AKP and the supporting National Movement Party (MHP) majority, however, the results also show that there have been 10 to 20 defectors at each vote. The debates and the rounds of voting are expected to last until the end of next week, and the proposal would need a qualified majority — at least 330 of the 550 deputies — on each