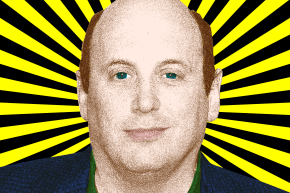 Prolific tweeter and journalist Kurt Eichenwald has identified the person who he claims tweeted a GIF at him that caused him to have a seizure.

Last December, Eichenwald, whose epilepsy is widely known, was sent a GIF of flashing lights with the words “you deserve a seizure” from an account called “@jew_goldstein.” Eichenwald’s account responded to the tweet with a message from someone claiming to be Eichenwald’s wife explaining that the GIF had, indeed, caused Eichenwald to have a seizure.

Eichenwald, a senior writer for Newsweek and contributing editor for Vanity Fair, then tweeted for his 240,000 Twitter followers to see that he intends to make good on a promise that there would be severe consequences for the tweeter, as well as the other trolls who continued to send him seizure GIFs. He pressed charges against @jew_goldstein and appeared to be in the beginning stages of filing a civil suit against him, which started with asking a judge to compel Twitter to release any identifying information about the anonymous troll (“Jew Goldstein,” it seems, is not his real name).

Legal experts said that Eichenwald probably had a criminal case against the troll, but weren’t sure if he could do much with a civil suit other than find out his identity. Keith Lee, a lawyer who has written about this for his legal blog, Associate’s Mind, told Vocativ at the time that he was skeptical that Eichenwald could ask for much by way of damages. He wondered if Eichenwald was just using pre-trial motions to find out the troll’s real name and then publicly embarrass him with no real intention of suing him.

On the doxing front, Eichenwald appears to have been successful. On Tuesday, his lawyers filed a “notice of nonsuit,” withdrawing the request for identifying information about @jew_goldstein because they now knew his name. But the motion did not say how they obtained it, nor did it indicate what they will do with the information. Eichenwald did not respond to request for comment, but did tweet (roughly a minute after Vocativ’s request was sent) to say “we’ve withdrawn only motion 4 twitter 2 identify him cause we know who he is.”

Which, at the very least, indicates that the troll is a man. A man who, from the looks of his attempts to stop Twitter from identifying him, is probably very scared right about now.