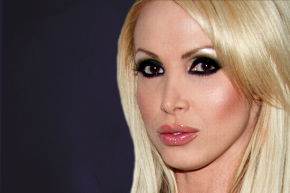 Tony T told Vocativ that the full footage of the shoot, along with still photos taken throughout, will be shown tonight in Los Angeles. He also claimed that all of the people who were on the set that day, aside from Benz, will be present to answer questions. “All the footage, everything, the evidence is gonna be there,” he said. “We’re gonna let the work and the proof talk for itself.” Tony T claims that the footage shows “there’s no stomping” and that “none of the stuff she ever claimed happened.” He alleges the footage shows Benz calling “cut,” but said: “The one time she said stop we stopped right away.”

Benz, reached by email, told Vocativ, “As for Tony T, we all know footage can be edited, deleted, and tampered with,” But she declined from making any further statements. On Twitter, she added on Wednesday, “Remember that truth will reveal itself. As a 13 year veteran in this wonderful industry I’m grateful to have an outstanding reputation.”

Tony T claimed in the interview that he runs “one of the most professional sets, period” and that “the whole of the industry knows how we run our sets.” In interviews with Vocativ, however, several other performers have alleged that Tony T was hotheaded on-set. Katrina Jade, a popular performer, alleged that she witnessed him screaming during a shoot, after which she decided to never work with him again. Tommy Gunn, a veteran male performer who has also worked with Tony T, said his “human skills” were “horrible.” He said: “I did my job and thought I’ll never do that again.”

Performer Tasha Reign alleged that she got into an argument on-set with Tony T about transportation during a shoot. She alleged that when she went to call her agent for help negotiating, Tony T yanked her phone out of her hand and wouldn’t let her use it. “It was the scariest thing,” she said.

When told of these allegations, Tony T said to Vocativ, “When you’re running a business sometimes people get mad,” he said. “That’s just pathetic.” He added, “They just need to bring their evidence and then we talk.” Asked specifically about the alleged phone incident, he said, “that person, they are being named in a lawsuit.”

Tony T then put Vocativ in touch with several performers whom he said could testify to his character. Performer Phoenix Marie who says she has worked with him at least 15 times described him as “the most respectful director I’ve ever met on set” and “a great guy.” She added, “I know a lot of girls don’t like working with him and I don’t understand it.” Lela Star, a longtime performer who has worked with Tony T several times, says, “He’s always been super professional.” She added, “I just think everyone just has different experiences in the industry.” Performer Ryan Conner said she shot with Tony T once and was warned ahead of time by the makeup artist, “You’re in for a big surprise, he’ll probably make you cry.” She said he “barked” at her over a wardrobe disagreement and was “yelling a lot” on set, but that at some point things shifted and he started being really nice. “My experience was great,” she said.

Tony T claims he is suing Benz, as well as several other women who made allegations against him on Twitter and media outlets that covered the story. He added that “some of these girls are divas.” “When you accuse someone of raping … you better come correct,” he said. “Every person that accused me of something is getting a lawsuit, that includes every person that put my name out there without evidence. My name got tarnished on some straight-up fake bullshit.”