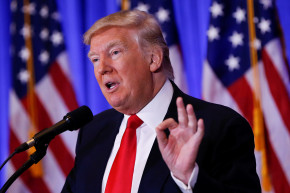 Russia Allegations At The Center Of Trump Presser On Business Ties

Donald Trump speaks during a press conference in Trump Tower — REUTERS
By Ethan Harfenist and An Phung
Jan 11, 2017 at 12:13 PM ET

President-elect Donald Trump held his first news conference on Wednesday since winning the election. What was already a highly-anticipated event that was postponed once before took on much more significance after he was confronted with a firestorm of negative press in the previous 12 hours.

Trump’s press secretary Sean Spicer opened the event with a statement strongly rebuking a 35-paged dossier released by Buzzfeed on Tuesday night that made unsubstantiated claims that the president-elect’s campaign and Russia had an intelligence exchange that took place over the last five years.

The embattled Trump took the stage after a brief introduction by Vice-president-elect Mike Pence, and immediately addressed the release of dossier by calling it “fake news.”

The impetus of Wednesday’s press conference was to address how Trump would handle his business empire post-inauguration in order to avoid potential conflicts of interest. But after Tuesday’s news regarding the dossier surfaced, some of which alleges that Russia is in possession of Trump’s personal and financial information that may prove damaging to his leadership, reporters’ attention swiftly turned to the controversial report. The allegations also appeared in a two-page synopsis by US intelligence officials that was attached to a report on Russia’s meddling in the 2016 presidential election.

According to CNN, the FBI is still looking into the possible accuracy of these serious allegations. Meanwhile, the Russian government dismissed the claims as “a total hoax.” In typical fashion, Trump took to Twitter to address the allegations and air his grievances with the media ahead of his news conference.

Russia has never tried to use leverage over me. I HAVE NOTHING TO DO WITH RUSSIA – NO DEALS, NO LOANS, NO NOTHING!

I win an election easily, a great "movement" is verified, and crooked opponents try to belittle our victory with FAKE NEWS. A sorry state!

Intelligence agencies should never have allowed this fake news to "leak" into the public. One last shot at me.Are we living in Nazi Germany?

Trump had the opportunity to backup his firestorm of early morning tweets at the press conference in Trump Tower in New York City, where reporters pounced on the chance to pepper him with questions about the damning allegations. Of his ties to Vladimir Putin, Trump remained steadfast on the significance of the relationship.

“If Putin likes Donald trump, I consider that an asset not a liability,” Trump said, referring himself in the third person. But his praise of the Russian president didn’t stop Trump from admitting for the first time that he thinks Russian operatives were behind the hacking of the Democratic Party during the election.

“I think it was Russia,” Trump said.

As for his business dealings, Trump introduced his lawyer Sheri A. Dillon, who took the stage to lay out what will happen when the real estate billionaire takes office. In short, he will not divest himself from his business when he assumes the presidency, but will turn his operations to a trust that his sons Eric and Donald will control.

Dillon addressed the Office of Government Ethics’ calls for a blind trust by saying that liquidating and placing assets in one would not eliminate conflicts.

“This plan offers a suitable alternative,” she said, adding that he “should not be expected to destroy the company he built.”