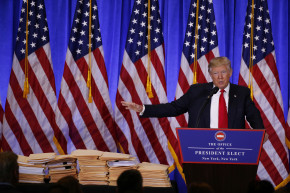 What Happens To Trump If The Russia Allegations Were True

If the salacious and damaging allegations of Donald Trump’s compromised position vis-a-vis Russia turn out to be true, Congress may take unprecedented steps to invoke constitutional provisions to remove him from office, law experts say.

“To actually be an agent of a foreign government is exactly what the authors of the Constitution feared,” said Gregory Koger, an associate professor of political science at the University of Miami, referring to claims that Trump regularly exchanged intelligence with his Russian counterparts.

While three presidents have faced impeachment proceedings, Koger says the scope of Trump’s scandals are unprecedented.

“There’s a reason this hasn’t come up before,” Koger said. “No president has thought about violating the conflicts of interest clause to this extent, though of course it’s unfortunate that this information is coming out so late.”

If it is indeed understood that Trump poses a threat to national security, legal options include resignation (unlikely in the case of Trump), a potentially months-long impeachment, or an application of the constitutional 25th amendment, which, if the government decided that the president-elect was indeed unfit to serve, would require the vice-president to step in to fill his place, Koger said.

Much will depend on the coming days and the still unconfirmed FBI’s investigation into the report’s details. The 35-page dossier, published by Buzzfeed on Tuesday night, claims that there was a possible qui-pro-quo agreement between the Trump and the Russian government, fostered over the past five years. It also suggested that Russia holds compromising information on Trump’s financial dealings and “perverted sexual acts,” including Russian surveillance footage of Trump hiring prostitutes to urinate on a bed once used by Barack Obama and his wife Michelle in the Moscow Ritz Carlton.

“Looks like the ugly stuff ‘leaked’ re [Trump’s] top-secret briefing was deliberately appended as an example of non-vetted disinformation, but it’d be naive to think that will stop Trump’s trashing of our intel community and dangerous to think we’re not at risk. Trump [has] deep entanglements with hostile foreign powers like Russia. He owes too much to too many and has too many conflicts to accept,” said Laurence Tribe, a constitutional law professor at Harvard Law School in a tweet on Wednesday.

The report comes amid mounting evidence that the President-elect Donald Trump could create, or already has created, conflicts of interest by blurring the lines between business, personal relationships, and politics, and by blatantly flaunting official protocol. While he’s blamed the discussion over potential conflicts of interests on the “crooked media,” he’s nonetheless promised to transfer his holdings into a blind trust that, according to indications, will still allow his children to run the companies –thus no longer “blind.”

Legal experts have noted in recent weeks that Trump’s potentially inappropriate relations with foreign diplomats could violate a rarely invoked constitutional clause, known as the Emoluments Clause, which prohibits any “person holding any Office of Profit or Trust under [the United States]” from accepting “any present, Emolument, Office, or Title, of any kind whatever, from any King, Prince, or foreign State” without first obtaining official permission to do so from Congress.

But in embroiling his interests with Russia’s, Trump is defying decades of US foreign policy.

“Russia and the USSR have been at this game for many, many decades, appealing to the fringe elements in the United States to destabilize our system,” said Richard Painter, a professor at the University of Minnesota Law School and the chief White House ethics lawyer from 2005 to 2007. “It’s critically important that the White House not only be independent of that, but also thoroughly investigate what’s going on.”

The Sunlight Foundation, a nonprofit that advocates for government accountability, counts at least 32 potential conflicts of interest related to Trump.

Trump has maintained his innocence on his Wednesday press conference, and has long sent out angry tweets that instead blame accusations on “fake news” organizations.

Russia has never tried to use leverage over me. I HAVE NOTHING TO DO WITH RUSSIA – NO DEALS, NO LOANS, NO NOTHING!

But while Trump detractors are hoping the Trump-Russia scandal to be the final blow to his political career, an FBI investigation will likely be slow and drawn-out, and potentially subjected to “a kind of political football,” said Elizabeth Saunders, an assistant professor of political science and international affairs and The George Washington University.

“If the Billy Bush video didn’t convince everyone of Trump’s unfitness, I don’t think this will, unless there is something clear and black and white, which doesn’t seem likely,” Saunders said.