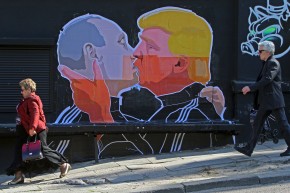 A Brief Timeline Of The Trump-Russia Allegations
By Shira Rubin

A Brief Timeline Of The Trump-Russia Allegations

Later Tuesday evening, Buzzfeed News published the full dossier, detailing an alleged regular intelligence exchange between the Trump campaign and Russia, a possible qui-pro-quo agreement between the two countries fostered over the past five years. It also suggested that Russia holds damning information on Trump’s financial dealings and private life — most notably surveillance footage of Trump hiring prostitutes to pee on a bed once used by Barack Obama and his wife Michelle in the Moscow Ritz Carlton.

The findings come from a former British intelligence officer who was hired by opposition research firms to dig up dirt on Republicans. He was reportedly concerned enough by his findings that he passed them on to the FBI.

The report remains unsubstantiated (the FBI declined to say if it was investigating), and Trump supporters are referring to the 35-page report — which is contains misspellings and incorrect references — as a politically motivated scheme invented by left-wing, “fake news” organizations.

The claims the dossier makes are controversial, highly damaging to Trump if true, entirely unverified, and complex. As more information emerges, here is a brief rundown of the (again, unsubstantiated) events the report describes:

2011: The Russian government begins to assist and support Donald Trump in efforts to create splits in the “western alliance,” including NATO and the Transatlantic alliance, which has in recent years criticized Russia’s foreign policy.

2013: Russian secret service allegedly records Trump in the Moscow Ritz Carlton Hotel, hiring prostitutes to pee on the bed in the presidential suite where Barack and Michelle Obama previously stayed. Trump is in Moscow for the Miss Universe pageant.

June 2016: A Russian foreign minister and a top-level security officer say that the Russian government and Trump have been colluding for at least the past five years. The claim is that Trump received intelligence on his Democratic opponent Hillary Clinton, and also was offered sweetheart real estate and business deals in Russia. Trump did not take advantage of the deals offered, including one in relation to the 2018 World Cup soccer tournament — but the Kremlin has enough damning info on him to use as leverage.

July 2016: Trump associates note that they’re aware that the Kremlin has hacked the Democratic National Committee and is releasing material harmful to the campaign of Hillary Clinton. The hacked material is fed through WikiLeaks to give “plausible deniability.”

August, 2016: Trump lawyer Michael Cohen holds secret meetings with Russians in Prague, Czech Republic. (Cohen says he can prove he was in the United States in August, and a source confirmed to the Atlantic that Cohen was in California visiting a university with his son for part of the month.)

October 12, 2016: Kremlin experiences “buyers’ remorse” over Trump election, finds that hacking efforts did not have significant impact on election results.

October 31, 2016: Mother Jones and the New York Times each publish stories claiming that a ‘veteran spy’ had given the FBI information about links between the Kremlin and Trump.

November 8, 2016: Donald Trump is elected president of the United States.

December 9, 2016: Senator John McCain, who has received a copy of the dossier, is sufficiently concerned that he passes the information on to FBI Director James Comey.

January 5, 2017: Barack Obama is briefed by top intelligence officials on Russian interference in the US election. Along with the larger report, a short addendum summarizes the accusations in Wilson’s report. Donald Trump reportedly receives a version of the briefing the next day.