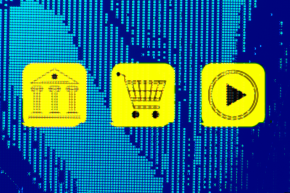 Everything can now be accessed through your smartphone

With the number of apps in the market increasing exponentially and the average person spending 90 minutes a day on their phone, it’s no wonder that 2016 was the year in which leading industries became more inclined to offer their products through an app. Soon, even your grandparents will be banking and streaming news on their phone.

App Annie, a mobile app analytics and insights company, released its fourth annual retrospective report looking at the top app market trends for 2016. There were more than 90 billion app downloads in 2016 between the Apple App Store and the Google Play Store — that’s 15 billion more than 2015 — and apps generated $127 billion in revenues overall.

However, the most notable trend was that banking, retail, and entertainment apps are disrupting their traditional industries by changing the platform in which more and more consumers engage with the market. These apps had the most growth worldwide in both downloads and usage over the last year.

“Those three industries are growing very quickly and they’re still in that young phase so there’s still a lot of innovation that can go on,” Amir Ghodrati, App Annie’s director of market insights, told Vocativ.

Banking services, both from established bankers and those developed by companies such as Venmo, Credit Karma and PayPal, saw an increase in the number of users using their apps. Venmo’s monthly active users in the U.S. went up from 4 million in 2015 to 9 million by the end of 2016.

Streaming apps have also increased drastically in usage. Three out of the top 5 apps of 2016 —Spotify, Netflix, and HBO NOW — based on worldwide iOS and Google Play revenue were all streaming apps. In the U.S., the top five streaming apps were YouTube, Netflix, ESPN, CNN, and Amazon Video. As a result, the entertainment industry may start rethinking their strategy to court a mobile audience. Netflix, for example, recently started offering offline playback for all its online shows — something Amazon, it’s competitor, already offered.

The most fascinating analysis from App Annie’s report was about the retail industry. In 2016, time spent in retail apps grew by 30 percent in the U.S. for November, compared to 2015. Usage and downloads were so high that Black Friday became the first day to ever generate over $1 billion of U.S. online mobile sales.

App Annie’s numbers show why established companies in a variety of industries are paying more attention to mobile, where everything is quickly accessible rather than having to use a web browser or visit a store. However, there are still plenty of banks that don’t, say, let users do convenient things like deposit checks by taking photos. Those companies are, at this point, in danger of being left behind.