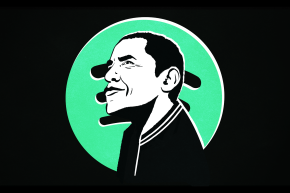 President Barack Obama will be out of office in less than two weeks, but he might already have a job lined up at Spotify.

Obama joked last week that he’d like a job at the music-streaming site, saying “Cuz’ I know y’all loved my playlist,” and this week Spotify responded with a “President of Playlists” job vacancy on its careers page.

Spotify CEO Daniel Ek tweeted out the job posting and tagged the @POTUS Twitter account to call his attention. Obama has yet to respond to the humorous job opening, but the requirements are obviously praising his accomplishments and style.

Hey @BarackObama, I heard you were interested in a role at Spotify. Have you seen this one? https://t.co/iragpCowpO

The position, based in New York City, requires the applicant to have “at least eight years’ experience running a highly-regarded nation,” and experience “in programming playlists at a federal level. Anything from an electric summer playlist, to a celebratory ‘I just found my birth certificate’ playlist.”

Other requirements that are very on-the-nose include “You should be nothing short of one of the greatest speakers of all time” and have good relationships with musicians asking, “Ever had Kendrick Lamar play at your birthday bash? We’d love to hear about it!

Obama is fit for the position — if not overqualified — since he has great taste in music. He created two highly-praised 2016 Summer Playlist that featured Janelle Monáe, Nina Simone, Prince, Janet Jackson, Jay-Z, Fiona Apple, and Sara Bareilles, among other talented artists.

President-elect Donald Trump, on the other hand, would definitely not be considered for this position given his troubled track record of finding musicians who want to be associated with him. Rebecca Ferguson is the latest as she declined to sing at his inauguration — unless she could perform Billie Holiday’s anti-lynching song “Strange Fruit.” During his campaign, famous artists such as Adele and The Rolling Stones told his team to stop using their songs at rallies.

Other great playlists Obama has created include his 2012 re-election campaign playlist, his inauguration playlist, and the workout playlist he shared with Wired.