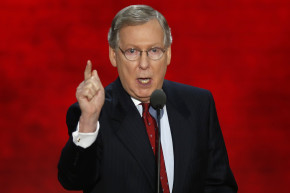 Why Republicans Are Starting To Freak Out Over An Obamacare Repeal

Curious how many in your state could lose their health insurance if the GOP repeals Obamacare without a replacement? We've got you covered

Republican Senator Bob Corker is beginning to get cold feet about an immediate repeal of Obamacare. And perhaps for good reason. Under the GOP’s current plan to gut the health care law before providing any alternative, Corker’s state of Tennessee could see the number of uninsured individuals soar by more than 525,000 — 7.9 percent of the state’s 6.6 million people — in the next two years, according to a recent analysis.

In Kentucky, home of Senate Majority Mitch McConnell, the uninsured number could rise by 200 percent, or 486,000 people. As for House Majority Leader Paul Ryan’s Wisconsin? Try 413,000 newly-uninsured, or about 7.5 percent of the state’s total population.

More Election Interference? The U.S. Has Done It In 45 Countries Worldwide

These figures come from a study published last month by the Urban Institute that assessed the impact of a partial repeal of the Affordable Care Act through the budget reconciliation process — precisely what Republicans leaders in Congress are proposing to do, now with the urging of President-elect Donald Trump. No state would be spared from devastating health care cuts under such a measure, which would scrap the expansion of Medicaid made possible under Obamacare, eliminate tax credits that helped many buy private insurance, and roll back tax increases that sustained the program, among other things. All told, the study found that a partial repeal would increase the number of uninsured in the U.S. by 29.8 million by 2019.

Republicans, however, seem unwilling to budge. Calling Obamacare “a catastrophic event,” Trump on Tuesday urged Congressional leaders to repeal it immediately and to replace “shortly thereafter,” he told the New York Times.

Some have criticized the Urban Institute’s report because it does not account for any potential replacement or modifications to remaining Obamacare provisions. “The problem with this doomsday scenario is that no one is suggesting repeal through reconciliation alone,” wrote Joel Zinberg, a scholar at the conservative American Enterprise Institute. However, despite six years of railing against and working to end Obamacare, Republicans have no replacement plan of their own. Nor does there appear to be any consensus around what a GOP alternative to the current health care law would look like.

Regardless, Republican leaders are hoping to adopt a budget resolution this week that would allow a repeal to Obamacare with just 50 votes in the Senate.

Which brings us back to Corker. On Monday, he and a group of four other Senate Republicans pushed an amendment to delay the repeal of Obamacare by two months. “By extending the deadline for budget reconciliation instructions until March, Congress and the incoming administration will each have additional time to get the policy right,” said Corker, who was joined by Rob Portman of Ohio, Susan Collins of Maine, Bill Cassidy of Louisiana and Lisa Murkowski of Alaska.

The move could buy Corker and his GOP colleagues a little more time. As it stands, their five states alone could see another 2.2 million people lose their health insurance should Obamacare be repealed without a replacement.