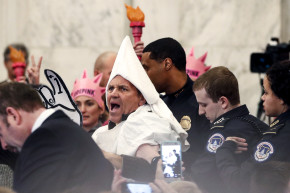 The issue of race was front and center at the confirmation hearing for attorney general nominee Jeff Sessions, the Alabama senator whose track record on racial issues is spotty, to say the least. Before the hearing even officially commenced, the senator was confronted with protestors posing in faux KKK robes to mock the hearing, and a flurry of online critics who accused him of using his half-Asian grandkids as props.

As Sessions walked into the room where his hearing before the Senate Judiciary Committee is being held, two protestors who appeared to be with Code Pink suddenly put on KKK robes, complete with giant white prop #1 fingers, and began cheering for Sessions. As police moved to arrest them, one said “you can’t arrest me! I’m white! White people don’t get arrested!” and “white people own this country!”

Sessions, meanwhile, brought his family to the hearing. This included his daughter, her husband, and their children, one of whom Sessions held on his lap as the confirmation began. Session’s son-in-law is of Asian descent, and many people on both sides picked up on the fact that as he prepares to come under fire for his track record on race, he made sure to demonstrate that he has Asian grandchildren.

Some accused Sessions of using his grandchild as a prop:

Is this Asian born child with Sessions a photo opportunity to show he’s not a racist.Who brings a toddler to hearings pic.twitter.com/4RX47MqTxS

Do my eyes deceive me watching @cspan. Is Sessions holding an Asian baby as a prop in the Congressional hearing? — Coretta (@elegantcoretta) January 10, 2017

The Asian grandchild at the #Sessions confirmation is just too much. Such an obvious “See how diverse we are” prop.

Gonna go ahead and assume the Asian kid (presumably a grandchild) on Jeff Sessions’ lap is no accident — Don’t Bitch. Vote. (@PhillyGameday) January 10, 2017

Others said that Sessions’ grandchild showed that he was not racist:

IF SEN. Sessions is so racist,funny he has no problem loving his granddaughters who are half Asian..please democrats stop playing racecard. — Patricia Shockey (@Trishawillie) January 10, 2017

How dare that racist Jeff Sessions drag his Asian grandchildren to his confirmation hearing!#SenateHearings *

Sessions’ granddaughter hung out on his lap for several minutes before she was returned to her nearby parents’ waiting arms. She will now watch her grandfather’s hearing, which is surely fascinating viewing for a toddler.