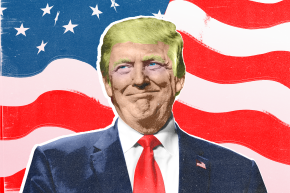 With Inauguration Day looming, tech companies have been under pressure to distance themselves from the incoming administration of president-elect Donald Trump, who promised during his campaign to target immigrants and Muslims with discriminatory surveillance and mass deportations.

Facebook, Google, and other Silicon Valley firms faced public outrage and employee protests last month, after they initially hesitated to pledge not to help Trump implement his proposal for a national registry of Muslims in the U.S. Several of those companies have since clarified that they would not help Trump build a registry.

But privacy experts say that if Trump follows through on his plans to monitor Muslims and deport immigrants en-masse, the data probably won’t be obtained through a secret court order served on Facebook or Google. More likely, it will be bought from a completely unregulated industry of online data brokers — companies that, in their everyday business, assemble and sell profiles of internet users from billions of data points, tracking their web browsing histories, shopping habits, and more.

“Yes, it is possible that Trump could get a bulk content order from the FISA court directed straight at Google or Facebook,” Nate Cardozo, a senior staff attorney at the Electronic Frontier Foundation, told Vocativ. FISA is the secret intelligence court that controversially approves the National Security Agency’s bulk surveillance. But those orders are only necessary for getting the contents of private communications and data stored in the cloud — for other kinds of information, there are easier ways.

“For profiling information, they can get it in other ways, without even going to a court,” says Cardozo. “They can just buy it.”

To most people, the thousands of companies that collect and sell that profiling data — Acxiom, Datalogix, and Experian, to name just a few — are obscure compared to Silicon Valley’s all-consuming data giants. As ProPublica recently reported, Facebook relies on data brokers to fill in the gaps in the information it collects from its users.

This data is compiled by tracking users as they shop and browse the web, using tracking beacons embedded into web pages to profile people based on demographics like race, age, and religion, as well as their political views, medical conditions, consumer preferences, and more. The website Me And My Shadow lets users see this trail of data they leave behind, visualizing how it becomes a kind of “shadow profile” that is sold to advertisers, credit agencies, and others.

Those digital shadows can become especially dangerous weapons in the hands of oppressive governments. While data brokers typically sell their user profiles to marketers and businesses, there are currently no restrictions on what kinds of data government agencies can purchase from them, says Cardozo.

Last month, three data brokers told CNN they “would not help to build a Muslim registry.” But the companies did not elaborate on what that meant, nor did they explicitly say they would refuse to sell profiling data to the Trump administration.

A spokesperson for Acxiom told Vocativ that helping the government build a database targeted to a specific religious, racial, or political group “would not be approved through Acxiom’s data and review programs.” A statement from the company claims the data and services it provides are subject to a “contextual ethical interrogation program” which “addresses respectfulness and fairness.” But the company did not elaborate on the specific criteria used to make judgements in that process.

“Threat intelligence” companies like Recorded Future and Palantir also perform similar data-scraping services and have close ties with US intelligence agencies. When asked whether his company would sell data to the Trump administration for profiling purposes, Chris Ahlberg, the co-founder and CEO of Recorded Future, told Vocativ that the company has “no interest in helping building a Muslim registry.”

“I think that’s right,” Ahlberg responded when asked to confirm that Recorded Future would not provide its data and services to government agencies if the company had reason to believe they were being used to target Muslims, immigrants, or political dissidents.

“Personal view: I hope all of this is pretty academic because it’s so upsetting that I can’t believe that it would actual happen,” Ahlberg added, in response to Vocativ’s emailed questions.

The new administration wouldn’t necessarily need to have targeted information about members of specific groups, however. Even with raw bulk data, machine learning algorithms can infer political or religious affiliations, such as by analyzing movement patterns derived from geolocation data —something authorities have long argued they don’t need a warrant to collect.

“The data that used to be sold and acquired mostly for advertising or marketing […] is now being used by a range of different entities, and some of these are already for political ends,” said Stephanie Hankey, the executive director of the Tactical Technology Collective, a Berlin-based advocacy group that created the My Shadow website.

She points out how in May of 2015, Ted Cruz’s presidential campaign used a marketing technique called “geo-fencing” to target Jewish Republicans who had gathered at Las Vegas hotel with messages that emphasized Cruz’s pro-Israel stance. Last year, anti-choice activists used the same tactic to target messages at women whose GPS data placed them nearby abortion clinics.

“[Whether] Trump will buy data from data brokers to build a registry of ‘enemies’ is impossible to predict,” Hankey told Vocativ. “However, not only is it entirely possible, we are already seeing the technologies necessary for this in use by others.”